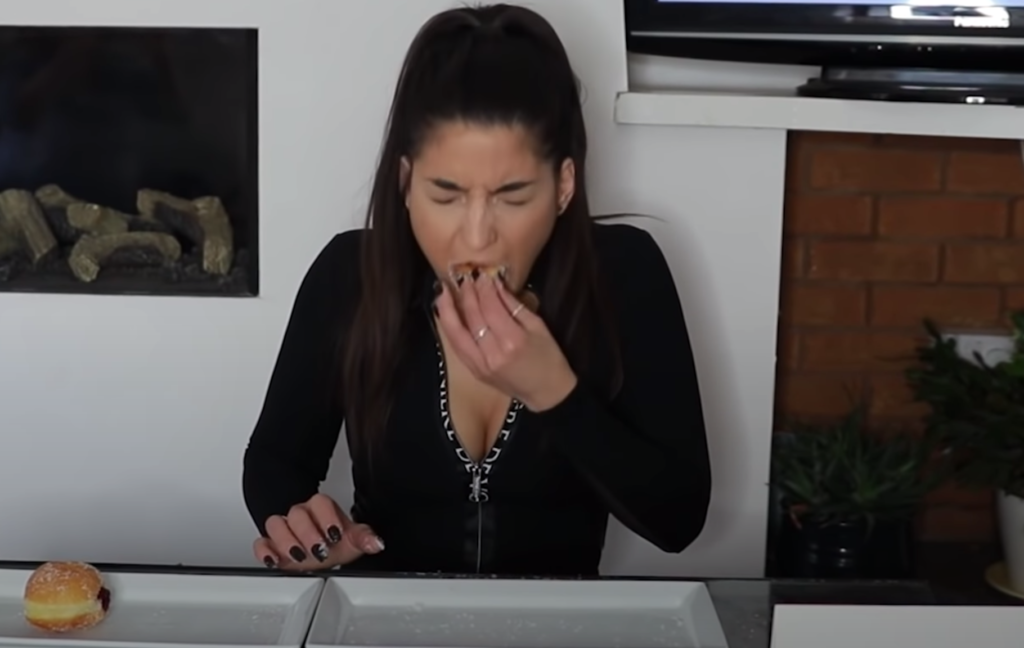 A UK woman has set a sweet new Guinness World Record that could well put you off jam doughnuts for life.

Doughnuts rank as one of Ireland’s most popular dessert treats, but the efforts of Leah Shutkever from Birmingham may be enough to change all of that forever.

A world-famous speed-eater, Leah boasts a variety of records when it comes to eating food quickly.

She holds the record for the fastest time to eat an entire cucumber – 27.16 seconds.

Leah has also eaten a record 380 grams of lasagne in just 30 seconds and holds the record for the fastest time to drink an entire litre of gravy (1 minute, 49 seconds).

Her latest challenge might have been her toughest yet though.

Shutkever was tasked with eating 10 sugar-frosted jam doughnuts in the space of just three minutes.

To make things even trickier, she was not allowed to lick her lips during the record attempt.

After every doughnut consumed, she was also required to open her mouth to prove she had swallowed it completely.

While there were a few hairy moments along the way, Shutkever pulled off the record attempt with few in the way of major issues.

Best of all, her efforts were recorded for proof and posterity for Guinness.

They do make for difficult viewing though. Especially if you like doughnuts.

A multiple Guinness World Records title holder, Leah is hoping to set 10 new records by the end of the year.

With the average sugar-coated jam doughnut boasting a whopping 220 calories, Shutkever succeeded in consuming an incredible 2200 calories in the space of just three minutes.

To put that figure into some perspective, nutrition experts estimate that average daily consumption for each daily meal should be 300 to 400 calories for breakfast, and 500 to 700 calories each for lunch and dinner.