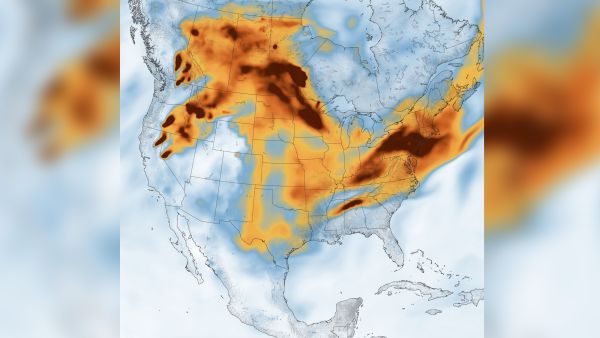 NASA has released striking satellite images of wildfire smoke clouds covering vast swaths of the U.S., from the West Coast all the way to the Atlantic Ocean.

Related: 10 Signs that Earth’s climate is off the rails

In New York City, levels of fine particulate pollution rose above 170 on the air quality index, which is potentially harmful even for healthy people, according to the Earth Observatory.

“That’s a magnitude of particle pollution that New York City hasn’t seen in more than a decade,” Ryan Stauffer, an atmospheric scientist at NASA’s Goddard Space Flight Center in Maryland, said in the statement.

In total, 79 wildfires have burned more than 2,263 square miles (5,860 square kilometers) in the U.S. and more than 21,700 wildland firefighters and support personnel are battling the blazes as of July 22, according to the National Interagency Fire Center.

The largest conflagration has been the “Bootleg Fire in Oregon, which has scorched more than 606 square miles (1,570 square km), according to CNN.

Although the biggest fires are currently raging near the West Coast, a majority of the smoke that reached eastern cities likely originated from a cluster of fires near the border of Manitoba and Ontario, according to the Earth Observatory.

Atmospheric smoke from wildfires along the West Coast may not be noticeable to people living in the northeastern U.S. and Canada. That’s because smoke that travels long distances tends to travel at relatively high altitudes, between 3.1 and 6.2 miles (5 and 10 km), the Earth Observatory explained. However, data collected from NASA’s Micro-Pulse Lidar Network and Aerosol Robotic Network suggests most of the smoke currently moving across the U.S. is remaining below 1.2 miles (2 km), according to the Earth Observatory.

This low-altitude smoke has darkened skies, reddened sunsets, tinted the moon orange and even created a smoky smell in places thousands of miles away from the fires.

The wildfires are a result of drought conditions and extreme heat, which are becoming much more common due to climate change. Last month was the hottest June in U.S. history and the fourth hottest worldwide, Live Science previously reported.