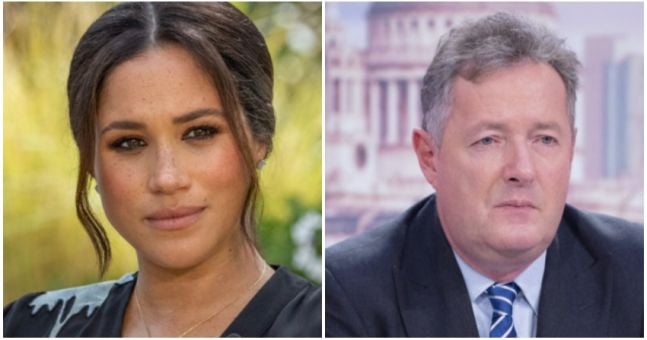 PIERS MORGAN has left his role as presenter of Good Morning Britain after six years.

The presenter, whose father is from Galway, had held the role since 2015 alongside o-host Susanna Reid.

Morgan has now left the role, as confirmed by himself and ITV, following highly-publicised controversy relating to the Oprah Winfrey interview with Prince Harry and Meghan Markle.

Piers Morgan left his role as a presenter with Good Morning Britain following backlash regarding his comments towards Meghan Markle after the Oprah Winfrey interview.

ITV confirmed the news in a statement on 9 March where a spokesperson wrote:

“ITV has accepted this decision and has nothing further to add.”

The announcement came after it was revealed that Ofcom received more than 41,000 complaints regarding his comments about Meghan Markle following the groundbreaking Oprah interview she and Prince Harry took part in.

It has also been reported that Markle herself made a formal complaint to ITV following the Good Morning Britain episode the morning after the interview.

According to the Press Association, the Duchess of Sussex made the complaint not because Morgan didn’t believe what she said, but because she was worried about how his comments could affect people attempting to deal with their own mental health problems.

Reportedly, Morgan was offered to the opportunity to apologise live on air, but he refused and quit the show on Tuesday evening instead.

What did Piers Morgan say that led to backlash?

Piers Morgan has long been a vocal critic of the actress and former senior working royal, and the news that Meghan and Harry would be interviewed by Oprah Winfrey led him to double down on the criticism, stating it was disrespectful to the royal family.

In the interview, Markle admitted her mental health had deteriorated to the point she was feeling suicidal but received no help from the royal family, and this was part of the reason she and Harry had decided to take a step back from royal life.

On Good Morning Britain the morning after the interview was aired in the US, Morgan made several angry comments about the couple and Markle in particular, and said he did not believe her, saying “I don’t believe a word she says”.

Royal correspondent Chris Shipp, also appearing on the show, told the presenter “Someone saying they had suicidal thoughts, I don’t think you can say that she was lying at that point. She had these thoughts, pretty serious ones.”

Morgan later clarified his comments where he said “it’s not for me to question whether she felt suicidal, I wasn’t in her mind and that’s for her to say”.

ITV runs a mental health campaign, Britain Get Talking, which encourages people to speak out about how they are feeling and to share with someone if they feel their mental health is suffering.

Piers Morgan’s comments were seen by many as detrimental to the campaign and accused the channel of being hypocritical.

What has Piers Morgan said following his departure from GMB?

The morning after it was announced Piers Morgan would be leaving Good Morning Britain, he wrote a short statement on Twitter which reads:

“On Monday, I said I didn’t believe Meghan Markle in her Oprah interview. I’ve had time to reflect on this opinion, and I still don’t.

He added: “Thanks for all the love, and hate. I’m off to spend more time with my opinions.”

He wrote the statement alongside an image of Winston Churchill and a quote which reads “Some people’s idea of free speech is that they are free to say what they like, but if anyone says anything back, that is an outrage.”

Speaking outside his West London home on Wednesday morning, Morgan told reporters: “If I have to fall on my sword for expressing an honestly held opinion about Meghan Markle and that diatribe of bilge that she came out with in that interview, so be it.

“I think the damage she’s done to the British monarchy and to the Queen at a time when Prince Philip is lying in hospital is enormous and frankly contemptible,” he said.

What will happen to Piers Morgan now?

The former Good Morning Britain presenter is a controversial figure, but it seems he is not lacking in job offers.

A source close to Piers Morgan told The Sun that the presenter has been “flooded with offers” of new jobs “and suggestions for new deals, some pretty interesting ones, plus a few wild and wacky offers which he had a laugh about”.

Plus, former BBC presenter Andrew Neil has told This Morning that Piers Morgan would be “a huge asset” to a new news channel, GB News, set to launch later this year.

“I’d want to do something a lot different with him at a different time of day. He is hugely adaptable and I think he could fit in anywhere

“I think he;s be a huge asset to our channel and we will try to get him on board if he was willing to do so.”