The new excursion route that has already proven itself in Europe — Farolero — has been presented in Kazan. The correspondent of Realnoe Vremya together with employees of the prefecture Stary Gorod and bloggers walked around the night streets of the Staro-Tatarskaya Sloboda, accompanied by a fairy-tale lamplighter.

From Grozny to Fuchs

The prefecture of Kazan Stary Gorod has announced the new tourist project Farolero, which radically changes the usual idea of traditional excursions. Participants of the meeting were invited to a mysterious evening walk around the streets of the Staro-Tatarskaya Sloboda. Those who came to the tour had to put on magic raincoats and put on headphones. The old man Farolero, who wandered through the countries, learned the world and people, appeared under a quiet melody. Music, twilight and the measured soft voice of the unusual guide created the atmosphere of a real fairy tale.

One of the main characters of the performance was a lantern and a Tatar sash with ornaments — khasite, which also have their own stories. Tourists were taken through the courtyards of Kayum Nasyri Street and the courtyard of Mullin’s estate, telling about domestic animals and mythical creatures, how people saved their homes from misfortunes, protected them from evil spirits, about Tatar traditions and customs, holidays and everyday life, about the decoration of ancient houses and crafts. 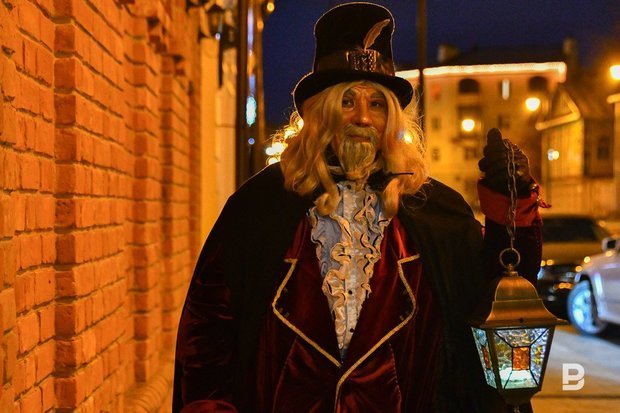 The old man Farolero, who wandered through the countries, learned the world and people, appeared under a quiet melody

The participants of the walk learned the details of how Kazan was born and how Kaban Lake appeared, where its inhabitants hid their treasures when Ivan the Terrible and his army stormed the city. Not only the guests but also the Kazan residents themselves will be surprised by the shortest and narrowest street of Kunche with its deep history. The width of this hundred-metre section of Kazan is 3,5 meters. But how many stories about tanners the street keeps! About the masters who made shoes in Paris and other cities in the 19th century — up to 3 million pairs of boots and shoes were sold around the world from Kazan every year. During the tour, they will tell you what “ichigi” and “bulgari” are and who wore them, what is common between Yves Saint-Laurent and Karim, the shoemaker. Not all residents of the capital of Tatarstan know that the famous Illustrator and animator maestro Alfeoni, who worked in Paris — is Alexander Alekseev, originally from Kazan. During the tour, they will tell you who managed to turn bricks into gold in the city, as well as about the Kazan mouser cats in the Imperial court and how the cat received the title of life guard.

The old buildings and mosques of the Staro-Tatarskaya Sloboda come to life before the guests of Farolero. They also have their own destinies, which over the centuries have become overgrown with legends. And how many and what names are associated with these places. Scientist and doctor Karl Fuchs, writer Kayum Nasyri, theologian and educator Shigabutdin Mardzhani — these people are the real treasure of Kazan.

Farolero treats his fellow travellers with Oriental tea and sweets, lights dreams in their hearts with the help of a fairy-tale lantern, makes them believe in their own strength and gives them the key to this dream as a keepsake. 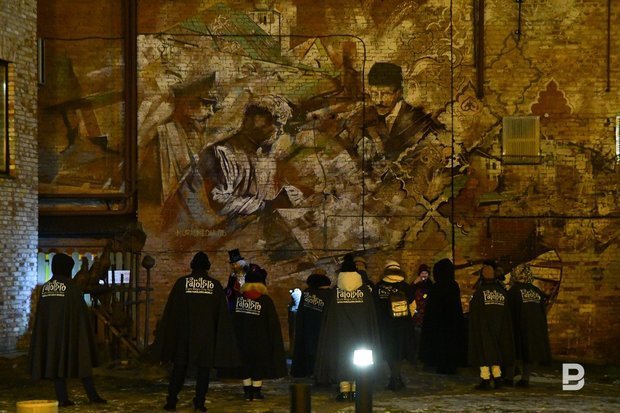 So far Farolero in Kazan is 90 minutes and 1,5 km of non-banal stories and impressions for children and adults

After Europe — back to Kazan

Farolero is an international project. Its author is former resident of Kazan Dariya Bikbayeva, who launched night walks in Berlin, Barcelona, Nice, Paris, London, Moscow, St. Petersburg and other cities. And now, at last, the former merchant and wanderer has brought his stories and legends to the capital of Tatarstan. So far Farolero in Kazan is 90 minutes and 1,5 km of non-banal stories and impressions for children and adults. The tour is conducted by professional actors. It is given only in the evening, this is the whole idea, the prefecture Stary Gorod told Realnoe Vremya.

“This is a bright mix of a theatrical performance and a pedestrian audio tour through the streets of Kazan, accompanied by the mysterious lamplighter Farolero, who knows the city like the back of his hand. The lamplighter introduces the people who lived here, easily moves through the centuries and tells about unusual and mysterious events. Ordinary streets and sights are the main scenery of the play that reveals the secrets of the streets of Sloboda,” the specialists of Historical Environment MBU, who are engaged in the new project in the prefecture, inform.

Robert Garipov, the prefect of the Stary Gorod territory, said that Farolero is a registered trademark, well-known brand in Europe. Daria Bikbaeva is the owner of the agency Sabantuy PLC, which deals with events in the field of culture and art. The lamplighter introduces the people who lived here, easily moves through the centuries and tells about unusual and mysterious events

Going deep into Sloboda and history

“We are focused on the development of this territory. Therefore, we constantly watch different guides and try to influence the tourist world of the Staro-Tatarskaya Sloboda. I must say, I have noticed that excursions are monotonous. Tourist buses arrive and watch hastily in 20 minutes the central streets along the time-tested route. We began to think with our team about how we can update the excursions, make them more interesting, go deeper into Sloboda,” Robert Garipov told our publication.

At the first stage, according to him, they came up with an excursion with a visit to Kazan bay, which became popular. The city gave the project authors their new idea, and the implementation itself is completely commercial, without the support of the municipality. But the tickets are not cheap either. The cost for an adult is 1,500 rubles, for a child — 950 rubles, there are family rates.

The routes of standard excursions in Staro-Tatarskaya Sloboda, as a rule, start from Tatarskaya Usadba, continue with the museum, then go along Kayuma Nasyri Street, “before reaching the Apanayevskaya mosque, up to the Kunche Street, to the Tatar Sloboda Museum — very interesting, interactive, and then — to the Mardzhani Mosque and go down to the Mardzhani monument,” Garipov complains. “Our project is open, we are ready to improve it, go deep. The Yunusovskaya Square is a very important, deep history of the merchant street of Tukaya. You can not go past the Blue Mosque, Azimovskaya, one of the most beautiful on the territory of our sloboda. Whether this will be related to the Farolero project is unknown, but there is a request for these objects,” Robert Garipov shares his plans.

He said that when he was immersed in work, together with his like-minded people, he walked for hours on the territory of the Stary Gorod, and discovered a lot for himself.

“We reached the cemetery. In Europe, many excursions include visits to graves. About 100 famous people are buried in our cemetery: Tukay, Mardzhani — this is a very interesting story, and it is not fully disclosed,” said the interlocutor of the publication.