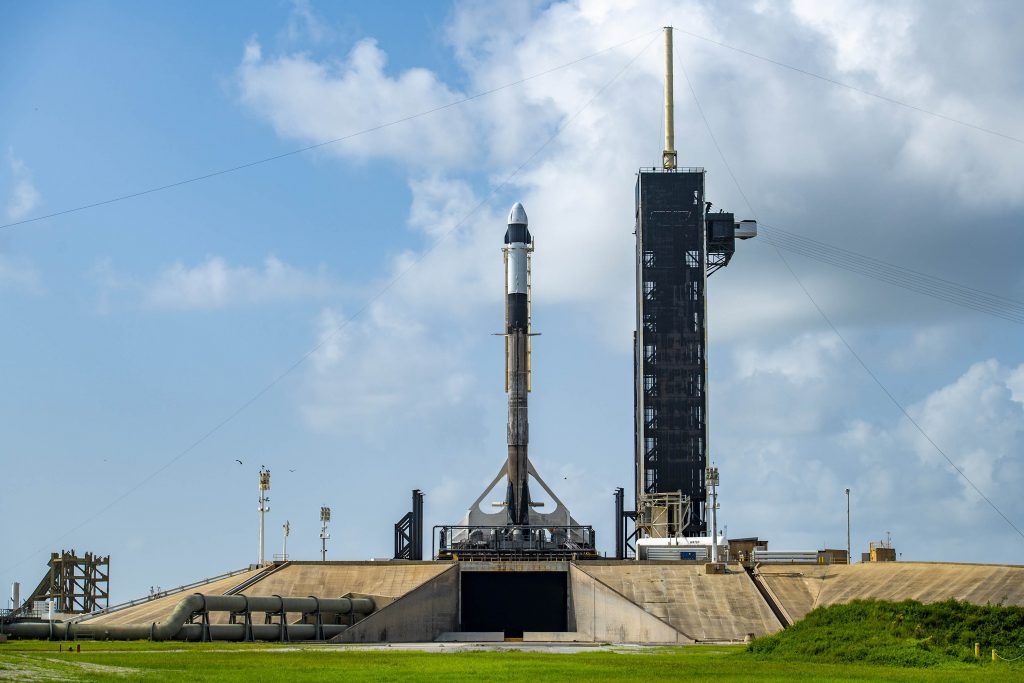 CAPE CANAVERAL, Fla. — SpaceX will launch a Dragon spacecraft packed with NASA cargo to the International Space Station before dawn on Saturday (Aug. 28) as part of its next resupply mission for the U.S. space agency.

A sooty, used Falcon 9 rocket will take to the skies here from NASA’s Kennedy Space Center at 3:37 a.m. EDT (1729 GMT). The two-stage launcher will blast off from Pad 39 lofting a robotic Dragon cargo capsule carrying more than 4,800 lbs. (2,177 kilograms) of fresh supplies, experiment hardware, and other gear for the astronauts aboard the orbiting lab.

You can watch the launch live on this page and here at Space.com, courtesy of NASA. You can also watch directly via NASA TV or SpaceX’s launch webcast page.

Related: See the Evolution of SpaceX’s Rockets in Pictures

“It’s always exciting to be talking about a mission the day before launch,” Joel Montalbano, NASA’s space station program manager said during a prelaunch news conference Friday (Aug. 27). “We are ready to go.”

Saturday’s launch attempt could be SpaceX’s first to get off the ground here at Cape Canaveral in nearly two months. The company’s last launch was a previous NASA cargo mission in June, with the long quiet stretch due to a pause in SpaceX’s Starlink internet satellite launches to upgrade those satellites. Saturday’s launch will break that dry spell, that is if the Dragon can get off the ground.

The weather outlook is iffy going into Saturday’s attempt, with forecasters at the 45th Weather Squadron predicting a 40% chance of favorable conditions for liftoff. The primary concerns being cumulus clouds, thick louds, and flight through precipitation.

There is another opportunity on Sunday if the rocket can’t get off the ground; however, the weather report improves slightly to 60% favorable. If Dragon can get off the ground as expected, the spacecraft will dock with the station on Sunday morning (Aug. 29).

Seen here is an up-close view of the SpaceX Dragon spacecraft atop the company’s Falcon 9 rocket after being raised to a vertical position at NASA’s Kennedy Space Center in Florida on Aug. 25, 2021, in preparation for the 23rd commercial resupply services launch to the International Space Station.  (Image credit: SpaceX)

The flight, dubbed CRS-23, is SpaceX’s third resupply mission under SpaceX’s second commercial resupply services contract with NASA and the third to use an upgraded Dragon cargo craft. This iteration, nearly identical to its astronaut-toting counterpart, allows SpaceX and NASA to send more cargo than before.

“We have hundreds of experiments that are being conducted on board, all across different disciplines across cell science microgravity microbiology, even animals to plant, technology and technology demonstrations to remote outreach as well as commercial adventure,” said Jennifer Scott Williams, NASA’s manager at the Applications Client Support Office for NASA’s International Space Station Program Research Office.

Tucked inside the cargo craft is a bevy of research experiments and crew supplies that will support a host of science investigations that focuses on life sciences, medicine, and much more.

One of the research investigations flying aboard Dragon will look at how plants behave in space. Dubbed APEX-08, the explore which genes are responsible for mitigating stresses in the plants.

Arabidopsis thaliana seeds, a type of thale cress plant commonly used in research, will be sent to the space station in small plant plates. Upon arrival, crewmembers will install the plates in the Veggies plant growth chamber and will be allowed to germinate.

At the end of nine days, the crewmembers will photograph, harvest, and preserve the plants to return them to Earth. Once back on the ground, the plants will be delivered to the investigators for gene-expression analysis. Researchers are hoping that this research will help shed light on how to grow heartier crops in droughts and other stressful scenarios.

Another experiment will look at how microgravity and radiation affect bone regeneration. Researchers from Italy will be sending stem cells into space. Those stem cells will mature over a period of 15 days into bone and other cells.

Those cells will then be treated with collagen and metabolites extracted from grape skins (a waste product of wine-making) to see how these metabolites can help the bones cells regenerate while in microgravity. Researchers are hopeful that this could lead to the development of new drugs and other therapies that can help with osteoporosis.

Puerto Rico is sending its first satellite into space as part of the CRS-23 mission. Called Puerto Rico Cubesat Nano ROcks 2 (PRCuNaR2), the cubesat will explore how materials coalesce in space to form planetary bodies. The researchers have designed a small satellite that will contain different material, like simulated regolith, and will take photographs and videos of how the different materials interact with each other while in microgravity.

Alessandro Grattoni of the Houston Methodist Research Institute is testing out a new drug delivery device in space. The tiny implant could provide an alternative to the bulky infusion pumps that are on the market today.

Grattoni will send 10 of the tiny devices, called the Nanofluidic Implant Communication Experiment (NICE) to the space station in order to test out how well controllers on the ground can communicate with and operate the pumps in microgravity. If successful, they will be used in a future rodent research experiment to test out how well the deliver drugs. The research could improve patient care here on Earth.

Researchers at the University of Massachusetts are sending a small cube sat to the ISS as part of an investigation that will test a new type of communication system for small satellites. The SPACE HAUC satellite will be deployed from the ISS and soar around the Earth, beaming back data to the team.

The satellite’s year-long mission will hopefully demonstrate that is can transmit data at speeds of 50 to 100 megabits per second, which is a significant improvement over current methods. Once in orbit, the team will test out a communication link between the satellite at its ground station at the university.

If successful, this technology could be rolled out to future small satellites.

Saturday’s launch marks the 21st flight of the year for SpaceX’s workhorse two-stage Falcon 9 rocket. The liftoff is expected to feature a veteran Falcon 9 first stage, designated B1061.

This particular booster has ferried three previous missions, including the Crew-1 and Crew-2 missions as part of NASA’s commercial crew program as well as the Sirius XM-8 mission in June. Early Saturday morning, it will ferry its third Dragon spacecraft to the ISS.

This is SpaceX’s fourth Dragon launch of 2021, and if all goes as planned, the company could launch a fifth before the year is over.

The Dragon used in today’s flight, was first used on the CRS-21 flight and once it docks at the station, there will be two different previously flown Dragons attached to the orbital outpost at the same time. Thanks to a variety of upgrades, the new iteration of the cargo Dragon spacecraft has allowed SpaceX to reduce the time it takes to refurbish the spacecraft.

Following an on-time liftoff, the Falcon 9’s first stage will return to Earth and touch down on the deck of SpaceX’s newest drone ship “A Shortfall of Gravitas” approximately nine minutes later. The massive ship is one of three floating platforms that SpaceX now has to catch its rockets.

To date, SpaceX has successfully landed its first-stage boosters 89 times. If successful, Saturday’s landing will mark the company’s 90th overall recovery, and “A Shortfall of Gravitas” first catch.

Dragon will spend just over 24 hours in orbit as it chases down the space station. After its arrival, the craft will dock itself to the orbital outpost on Sunday morning at 11 a.m. (1500 GMT).