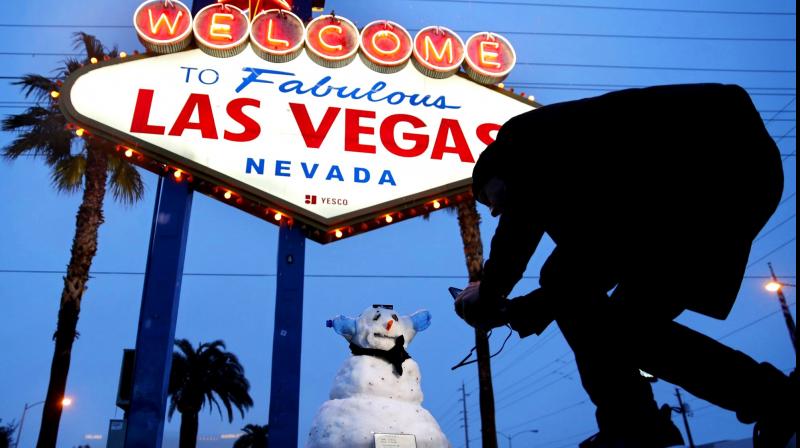 Las Vegas: Winter storms in the US Southwest brought snow to places it rarely falls, dusting casino marquees on the Las Vegas Strip and sticking at very low elevations on the foothills around Southern California. “No need to panic Los Angeles, the LAPD is on snow watch,” the city’s police department tweeted, along with video of a light flurry.

Snow fell in the Santa Monica Mountains above the Malibu coast. In the nearby celebrity haven of Calabasas, actor Jerry O’Connell recorded video of himself as snow fell on his car and quickly melted. “It is snowing in Calabasas, crazy!” he said.

The National Weather Service had said the snow level could lower to 1,000 feet (305 meters). Earlier, the storm coated large areas of desert northeast of Los Angeles, temporarily halting traffic on various state routes. The rare snowfall at low levels in Nevada prompted revellers to erect a snowman near the famous “Welcome to Fabulous Las Vegas” sign.

“We don’t have snowploughs,” airport spokeswoman Christine Crews said as she tallied about 100 flight cancellations because of snow and ice. “But we have airfield maintenance vehicles and sweepers ready to go.”

Some suburban foothill areas near Las Vegas were white after getting several inches of snow. On the casino-lined Las Vegas Strip, the snow was fleeting, melting faster than a bad gambler’s luck. “We expected cold, but not snow,” tourist Lila de Guerrero said after taking a photo at the Las Vegas sign wearing a puffer coat and hat.

De Guerrero, who is visiting from El Salvador, said it was the first time she had ever seen snow. German tourist Daniela Huber said she was surprised that her vacation to the desert wasn’t much of an escape from winter. “We thought it was strange because we came from Germany, where it snows all the time,” she said. Outside the city, authorities closed portions of the main routes from Las Vegas to Los Angeles and Phoenix because of snow, ice and limited visibility. 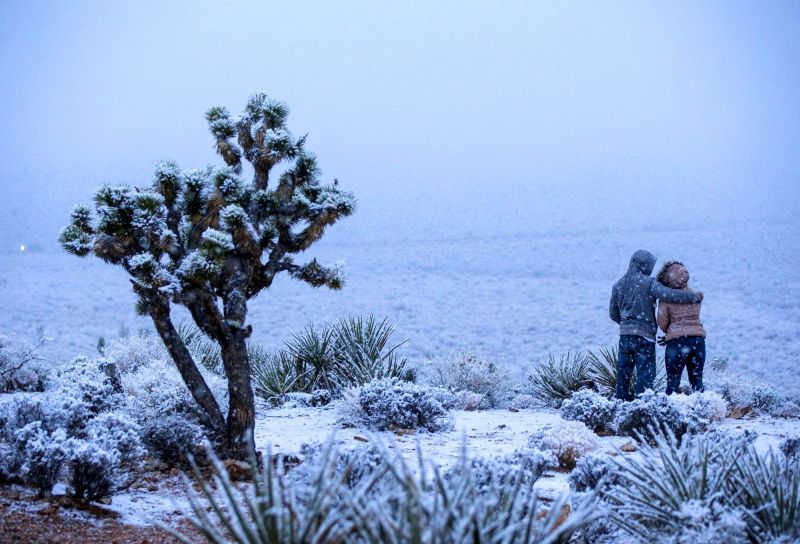 The California snow arrived with a very cold storm that added even more precipitation in a wet winter that has almost eliminated drought conditions state-wide. The emergency management office in St. Paul, Minnesota, tweeted advice to Los Angeles residents on how to safely walk on ice and snow. “It’s beautiful,” said Kate Porter, a resident of the desert community of Joshua Tree.

Snow closed heavily travelled Interstate 5 in Tejon Pass north of Los Angeles until Caltrans crews could clear the roadway, allowing traffic to resume under Highway Patrol escorts.  Snowstorms also blanketed other parts of the Southwest, forcing the closure of Interstate 40 and an airport in Flagstaff, Arizona.

Barney Helmick, director of the Flagstaff Pulliam Airport, said its only runway closed when the visibility level hit zero. Intense snow also forced the closure of schools and businesses in the region.