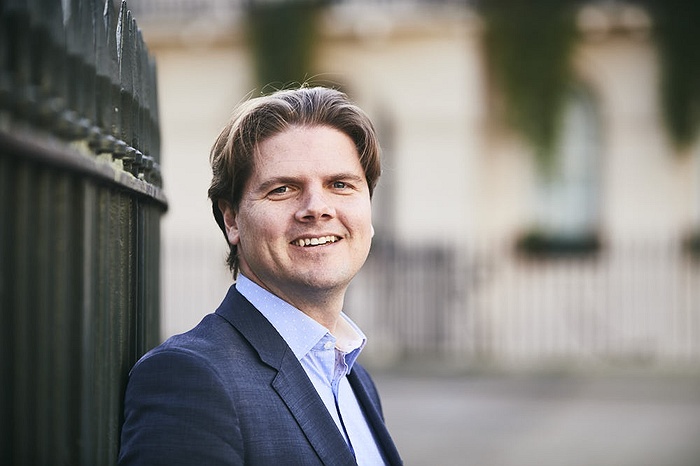 CEO and co-founder of HotelPlanner.com talks about his company’s success and his need to give back to those less fortunate.

Hentschel, 39, was speaking from experience. Calculating its profits and counting its customers Hotel Planner (HP) has grown in the hundreds of millions since he first launched the on-line tourism company with his business partner, John Prince, in 2003. In fact, this year alone, HP has booked hotel accommodations for more than five million groups throughout the globe, generating billions of dollars in revenue for the 100,000 hotels in its network and earning hundreds of millions of dollars in profits for the company.

Hentschel told me that he attributed HP’s success to its “consumer friendly” philosophy,  combined, he added, with the “revolutionary technological innovation” the company has developed over the past 15 years.

“We strive to be consumer friendly in both word and action,” he stated. “Whether we are booking rooms throughout the world for weddings [250,000 in 2018], corporate [300,000 in 2018] or athletic events for sports teams – including professional, college, high school – and youth sponsored associations [200,000 in 2018] – or a wide variety of other types of events, we treat our customers as though they are family which, I believe, contributes to the high rate of customer satisfaction that HP enjoys in the travel industry.”

“We developed the most advanced Artificial Intelligence System [in the industry],” he stated. “Our system sources and records the top 10,000 global events currently in progress. In addition, the data we have collected from millions of group bookings over the past 15 years provide the figures we present to hotels as a bargaining tool to negotiate the lowest price for our customers.”

There was good reason, I learned, why throughout the interview Hentschel consistently used the pronouns “we”, “our”, “ they” or simply the company’s name or initials “HP,” while rarely employing the pronoun “I,” when talking about his company’s groundbreaking success in the tourist industry.

“While John [Prince] and I started Hotel Planner, we both continue to understand that the success the company has achieved over the past 15 years is attributable to our talented and customer friendly employees; they work together as a team with one goal in mind- to find our clients the best rooms, whether 6 or 600 hundred, for the best price on the market. And all of our employees show by their words and actions that they realize that there is no letter ‘I’ in the word ‘team,’ Hentschel stated.

Still, coordinating the work of all of the employees in this “team” might appear to be a daunting challenge. HP employs more than 300 men and women (who are shareholders in the company) and has offices in London, England (the European Headquarters), Hong Kong (the Asian Headquarters), West Palm Beach, Florida (the American Headquarters) and Las Vegas, Nevada. It is from these four centers that the HP staff manages the hotel bookings for millions of groups to the top 50 destination sites in the world, which include Paris, London, Madrid, Dublin, Amsterdam, Hawaii, Jamaica, Los Angeles and New York.

For California born and raised Hentschel,though, it is all a piece of cake.

“There is nothing difficult about being the CEO [of HP] because the very nature of the travel industry makes it inherently fun,” stated Hentschel. “We are bringing people together for only good things – business, leisure and celebrations. So the more people we are providing our services to, the more fun we are having. All of which has been the formula for our success.”

While Hentschel, the married father of three young sons, acknowledged that this success that HP has achieved has been professionally, financially and personally rewarding beyond even his and Prince’s original high expectations, he told me that he feels that helping people in need can be even more rewarding than personal accomplishments.

“My parents taught me, and I plan to  teach my own children, that people who have the financial means have a moral responsibility to help people who are in need. The feeling of accomplishment you receive from helping others, I have learned, is like no other,” he stated.

Hentschel was speaking from experience. HP has partnered with St. Jude Children’s Research Hospital (aka St. Jude), one of the leading cancer research centers in the world, which treats children with cancer and does not charge uninsured patients. As part of that partnership, which to date has brought in hundreds of thousands of dollars to the hospital, HP has over the past 4 years sponsored an annual American Group Travel Award (AGTA) ceremony to help raise funds for the hospital. This year’s event, which was held on Monday evening November, 12th in a large elegant club in New York City’s Chelsea district, drew more than 350 guests. These guests included entrepreneurs from the travel industry (22 of whom received special awards that night recognizing their contributions to the travel industry) their staffs, leading media figures and prominent philanthropists, who collectively donated thousands of dollars to St. Jude that night.

Hentschel, who to attend the event had flown just the day before to New York from London, where he has lived with his family the past 6 years overseeing HP European Headquarters (this interview was conducted the morning of the AGTA event), explained why he and his company chose to work with and support St Jude.

“As a parent, the suffering of children troubles me deeply” he stated. “So it was an easy decision to support St. Jude because its mission is to find cures for childhood cancer, which, when this cure is found, will save the lives of millions of children throughout the world. We [at HP] are driven by the belief that the more money we are able to help raise for St. Jude, the sooner that cure will be found.”

“We were also impressed,” Hentschel elaborated, “by the fact that it [St. Jude] uses the funds it receives from charities and other sources to treat the patients who come to the hospital without insurance for free, and also that St. Jude is known to provide a very nurturing environment for the families of its young patients. I know as a parent how much support I would need if one of my children was battling cancer, so I was incredibly touched by the support they offer to the families of their patients.”

HP recently became involved in a second charity- the Hotel Planner Scholarship Fund (HPSF), which it started from scratch. Higher educational in nature, HPSF offers financial assistance for US military veterans, their spouses and children, when they are enrolled in an undergraduate or a graduate college program in technology or technology related studies. Hentschel explained what motivated him and his company to launch this charity.

“We saw it as both our patriotic duty and our highest honor to plan something that would help our courageous service men and women and their families. And we understood that in this technology driven economy, the best job opportunities are found in the field of technology,” he stated.

All of Hentschel’s charitable work and all of the success he has achieved as the co-founder of the largest hotel group booking site in the world, however, has not made him or HP immune from controversy. That controversy arose in the wake of the February 11th, 2018 school shooting in Parkland, Florida, which left 17 people dead and dozens of others wounded.

The National Rifle Association (NRA), which shortly after this massacre (as well as the many other firearm related mass shootings that have occurred in America in the past) was widely condemned for its well-known anti-gun control stance, saw a long list of companies and corporations they had prior long-standing business relationships with fully sever their ties with them.

Those companies and corporations ending their business relationship with the NRA included Delta and United Airlines, Alamo and National Rental, Met Life Insurance, the First National Bank of Omaha and Symantec (a major software security concern). But not among them was HP, which in acontract it had drawn with the NRA several years ago, granted the association’s members access to the company’s discounted group rates. For the decision to honor their contract with the NRA, Hentschel suddenly found himself and his company slammed in the media and criticized by gun control groups.

Explaining why HP made that decision, Hentschel said, “It was based on the belief that contracts, which are at the core of all business interactions in America, should never be broken; the realization that our NRA affiliated customers, who are hard-working, honest Americans, would have had their vacation plans adversely affected [if HP withdrew from the contract]; and lastly, that  HP’s philosophy is based on bringing people together, which means that we will never participate in any boycott. And let me note for the record,” Hentschel added, “I am not a member of the NRA. The amount of money we take in from the NRA is insignificant. And I support efforts to end the epidemic of gun violence in America.”

That this once extremely passionate controversy over HP’s connection with the NRA was to come to a final and benign end for HP within just a few weeks after it started, Hentschel attributed to the fairness of the American people.

“What I just explained to you is what we used our social media network to explain to the public,” he stated. “Americans are guided by facts and reason; once they learned the reasoning behind to our decision to honor our contract with the NRA, most people, even the ones who still disagreed, came to respect our decision. From then on, the controversy was put behind us, and HP was able to get back to our work in the travel industry.”

Hentschel said he believes that his involvement and eventual enormous success in that industry was in a sense the inevitable result of his unique upbringing. I wasn’t surprised when he told me this: I already knew from my prior research that Hentschel had been taken in at the age of 6 and later adopted by a woman who owned and operated a hugely successful international tourist company, and by her husband, who owned and ran four major hotels in California. And as I also had previously learned, at his parent’s counsel, Hentschel, after high school, had enrolled in New York State’s prestigious Cornell University, later earning a coveted 4 year degree in Hotel Management.

“I always wanted to be an entrepreneur like my mother and father, who were my role models and greatest supporters. From my father, I became well acquainted with the hotel industry, and from my mother I learned about the travel side of the tourism business. And my studies at Cornell complemented and furthered what I had learned from my parents,” he stated. “So you might say given that background that I was almost destined to become something of a major player in the tourism industry.”

Yet, as I also learned prior to the interview, Hentschel’s self-described destiny had been anything but preordained; just prior to being placed in his new home, Hentschel had been living in a car with his indigent single biological mother in South Central Los Angeles, and eventually became a ward of the state of California.

Hentschel told me that while he still retains painful memories of those trying days in his early life, he eventually came to understand and become even appreciative of his biological mother (with whom he became reacquainted ten years ago) and remains forever grateful to his adoptive mother and father.

“It took a while, but I  have come to understand and accept the fact that my biological mother was unable to take care of me….I will always thank her for giving me the gift of life”, he reflected. “And I will always love and appreciate my [adoptive] mother and father who through their love, teaching, guidance and support enabled me to make the very most of my life.”

He has done just that.