Message from the Road Agency

The M25 is OPEN clockwise between J30 and J31 after complex recovery works and emergency lining after the serious collision yesterday afternoon. Thank you for your patience if this incident affected you. Delays are approaching J30, but should start to decrease. 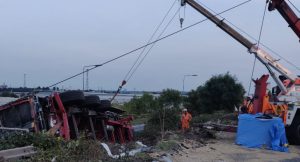 The M25 clockwise in Essex is closed between J30 (Thurrock, Tilbury, A13) and J31. This closure is due to a serious collision involving 2 heavy vehicles on the J31, which will require extensive recovery and cleaning operations. One heavy vehicle involved overturned on the embankment and both heavy vehicles suffered significant damage. There is also a major diesel spill that has caused significant and widespread damage to the road surface. A complex recovery operation is underway, but it has reached the stage where the dealer road between J30 and J31 is no longer blocked and traffic can be allowed to use it. The paving work on the main road between J30 and J31 will be carried out during the night.

There are still severe delays in approaching both the M25 and surrounding local roads, including the approach on the clock hands to Dartford Crossing, where traffic has been measured. Allow plenty of extra time for your trip and, if possible, consider alternative routes.

As VHG recovery work has been sufficiently completed to do so, the clockwise M25 approach to #Dartford has been partially reopened. The closure remains between J30 and J31, although traffic can now pass through the adjacent feedways, blocked by the HGV.

It will now be necessary to do paving work to reopen the main road, which will take several more hours.

Statement by the Road Agency: “Incident M25 J31. It is not possible to open the access road to the bridge from the J31, as one of the heavy vehicles involved in the collision overturned towards the embankment located next door of this access road.Once the HGV is safely removed, we will try to reopen this road.

Essex Police: “We are currently at the site of a collision involving two heavy vehicles on the M25 clockwise between junction 30 and 31.

The stretch of road has been closed and will remain closed for the next few hours due to the complexity of vehicle recovery.

This is already affecting the volume of traffic on the surrounding roads, in particular the A13 and A127.

We recommend avoiding these roads when possible and leaving extra time for your trip.

The two drivers are being treated for minor injuries, no arrests have been made and investigations are continuing to establish the circumstances surrounding the collision.

Witnesses or anyone with command camera images are asked to contact the Chigwell Highway Police Unit at 101, citing the August 28, 647 incident. You can also send an email to collisionappeal@essex.pnn.police.uk.

The air ambulance has landed.

Ensign Buses: Due to QEII bridge closure and major traffic issues, there are no services that can operate inside or outside Lakeside. All services will start / end in Grays until further notice

We are currently at the site of a collision on the # M25 clockwise between J30-31. The stretch of road will remain closed for the next few hours due to the complexity of the recovery. This is affecting the volume of traffic on the surrounding roads bit.ly/2NtFwgy

M25 J30-J31 clockwise: traffic continues to stop and the road is blocked at J31 (Thurrock) due to a collision involving 2 heavy vehicles (one has left the road).

CLOSED on the J31 (Thurrock) due to an accident involving a truck on the road sliding onto the M25 on the J31. Traffic is stationary on the approach between J31 (Thurrock) and J28 (A12 Brook Street roundabout).