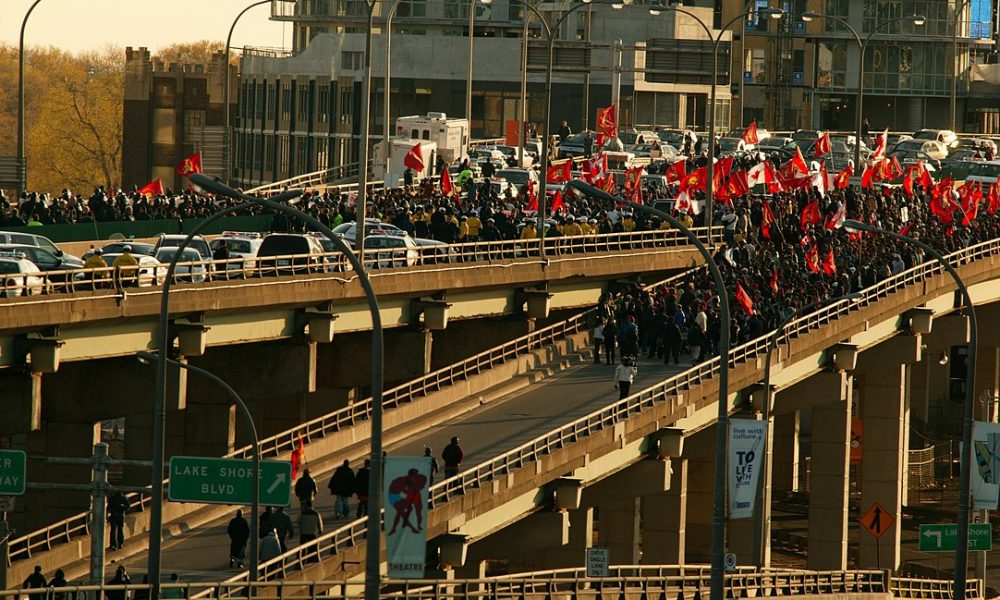 On Mother’s Day in 2009, over 2,000 Tamil protesters stepped onto Toronto’s Gardiner Expressway, chanting “no more genocide,” blocking every lane of the highway, bringing traffic to a standstill.

These protests were in response to an atrocity that took place near the end of the Sri Lankan civil war, a war that lasted 26 years and ended with genocide. The atrocity saw tens of thousands of Tamil civilians lured by the Sri Lankan government into “no fire zones”, and trapped under gunfire.

When news broke, Toronto Tamils took to the streets to demand justice after months of peaceful protests, hunger strikes and rallies across the city. The Gardiner protest was a pivotal moment for Toronto Tamils, in terms of both shaping their political identity, and recognizing the strength of community mobilization.

Tamil women formed the front lines of this protest and deliberately chose this role to de-escalate any potential conflicts between other protesters and the police. Tamil women have been active leaders and participants in resistance movements, both in Canada and Sri Lanka. This is work that has been happening for decades.

As an Eelam Tamil anti-racism educator and scholar-activist who has spent all her life in Toronto, my doctoral research is located within the intersections of trauma-informed migrant healing, liberation psychology and arts-based participatory action research. I am grounded in a decolonial theoretical framework and committed to global feminisms.

This Mother’s Day, I encourage you to reflect on why mainstream media doesn’t recognize racialized women-led global resistance movements as feminism. Western society’s narrow view of feminism is grounded in white assumptions and catered towards the privileged, excluding acts of resistance by racialized mothers as feminism.

This article seeks to centre Tamil mothers in a feminist dialogue that otherwise would be drowned out by white noise.

The demonstration by the Tamil community in Toronto garnered overwhelmingly racist attention and negative media coverage, labelling them as ungrateful immigrants, and strategically using the “women and children” phrase to paint a passive, patriarchal image of Tamil mothers, ironically on Mother’s Day.

The National Post published phrases like: “let’s call it the Tamil traffic strategy,” and “rabid Tamils surged into roadways blocking traffic … turning from figures of sympathy into bloody nuisances, from citizens into adversaries, from freedom fighters into extortionists.”

And there was a focus on othering the Tamil community, dehumanizing their existence, delegitimizing their demonstrations and removing the agency and will of women and mothers participating in and leading these protests.

When we think of when women got the right to vote in Canada, it tends to go back to when white women got it — in the 1920s. But it wasn’t until 1948 that Chinese, Japanese and South Asian women were able to vote and Indigenous women received this right even later, in 1960. Simply put, popularized feminism is not intersectional. As feminist, and social activist bell hooks eloquently writes:

“White women who dominate feminist discourse today rarely question whether or not their perspective of women’s reality is true to the lived experiences of women as a collective group.”

Global feminist movements and everyday acts of women-driven resistance by racialized mothers and women don’t get the same spotlight as mainstream western feminist campaigns. Non-western feminisms are often historically erased and remain invisible within the media.

Tamil women and mothers fighting for their community

Tamil mothers and women are the glue to our community’s solidarity, activism and resistance.

Eelam, the native Tamil name for the island of Sri Lanka, has the second-highest number of enforced disappearances in the world. And for the past four years Families of The Disappeared has been fighting for truth and justice and searching for their loved ones.

Approximately 100,000, predominantly Tamil people, have been disappeared by the state since 1983. Now 12 years since the end of the armed conflict, the whereabouts of the disappeared are still unknown.

Women and mother-led protests by Families of the Disappeared began in 2017 with roadside demonstrations in Kilinochchi to demand answers for the fates and locations of their loved ones. Sister protests across the island were also mobilized in Vavuniya, Trincomalee, Mullaithivu, Kilinochchi and Maruthankerny.

These demonstrations are characterized as ammas (mothers) and ammamas (grandmothers) sitting on the road, holding photos of their loved ones, in all weather conditions, despite militarization and intimidation by police. At least 78 people have died in this pursuit of truth and justice.

And their work largely goes unrecognized. By mainstream media not identifying and highlighting these mother-led resistance movements, they are contributing to the erasure of these narratives. These powerful stories deserve to be told. This is the kind of work you should picture when you hear the word feminism.

Feminism, as it is portrayed by mainstream media, should not be reserved for privileged white women. The intergenerational struggles and resistance of racialized women and mothers living in the west, particularly of Black and Indigenous people, is often not given space.

This Mother’s Day, join me in searching for global stories about racialized mothers and women you haven’t heard before. Not because they didn’t happen or has less of an impact, but because they were not given the same attention.