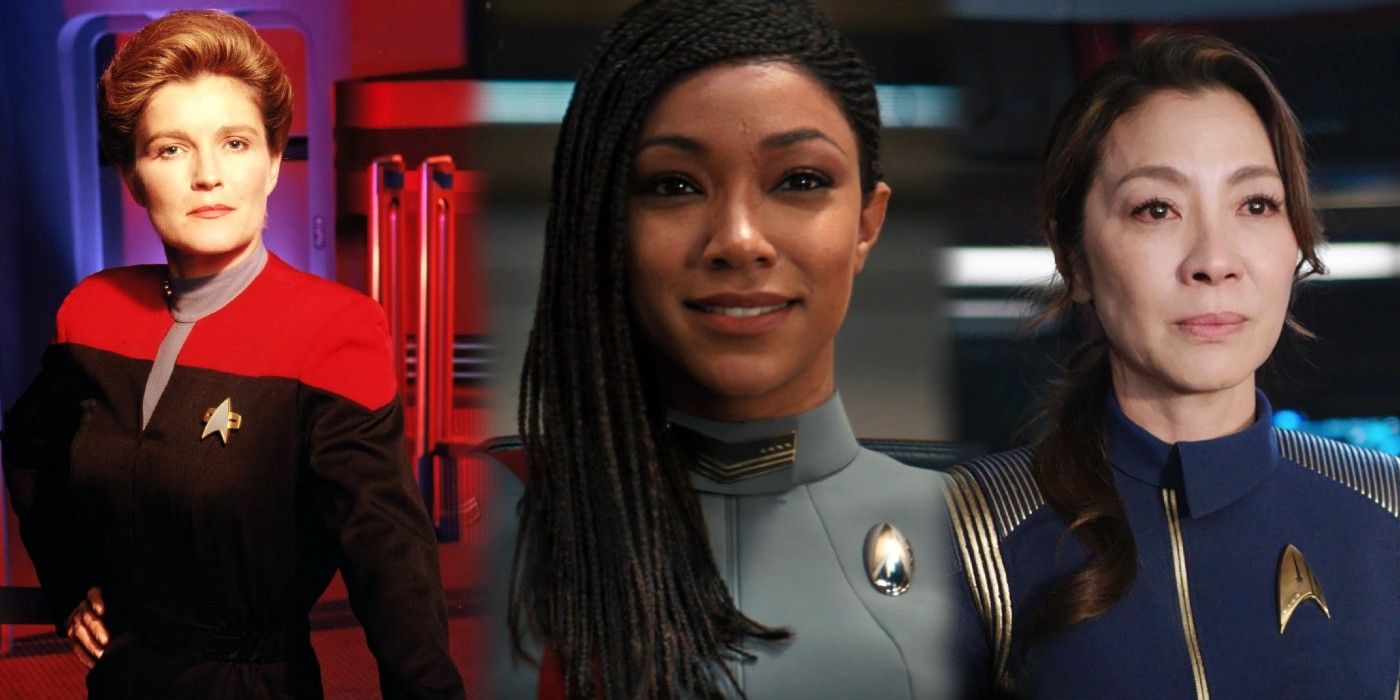 Although the Star Trek franchise has been largely dominated by male captains, the list of women who have attained the rank is a lot longer than people might expect. The franchise began with Star Trek: The Original Series in 1966, depicting a vision of the future where humanity had overcome its problems as become part of a galactic power that was founded on peace and exploration. In keeping with this utopian future, every Star Trek series has consistently strived for diversity, including showing women in high-ranking positions within Starfleet.

Prior to Voyager, several important female captains were included in various Star Trek series and movies, and the franchise did not stop depicting them after Voyager ended. To date, there have been 12 important female captains that have played pivotal roles in the franchise. However, it should be noted that many more have been referenced in writing or in dialogue while not being shown directly on the screen.

Captain Of The USS Saratoga

Although never given a name, the Captain of the USS Saratoga in Star Trek IV: The Voyage Home was the franchise’s very first female captain. The Voyage Home was the 4th of 6 movies produced about the cast of The Original Series and is widely regarded as one of the greatest movies in the Star Trek franchise. The Captain of the Saratoga had a brief but memorable role towards the beginning of the film where she and her crew became some of the first victims of the main antagonist, an alien probe heading towards Earth. The Captain was played by actress Madge Sinclair, who would go on to play the role of another female captain that will be discussed later on.

Star Trek: The Next Generation kicked off its list of female captains in season 1 with Captain Phillipa Louvois. Played by actress Amanda McBroom, Louvois was featured in the classic TNG episode “The Measure of a Man,” where she served as the judge in Lieutenant Commander Data’s sentience trial against Bruce Maddox. Louvois was implied to have had a previous romantic relationship with Captain Jean-Luc Picard, although this was never confirmed. Interestingly, Louvois is also one of the very few staff captains depicted in Star Trek, meaning that she was not in active command of a starship, instead serving Starfleet in another capacity as part of the Judge Advocate General’s office.

Although she was only featured briefly in the TNG episode “Conspiracy,” Captain Tryla Scott, played by Ursaline Bryant, should be remembered as an important part of Star Trek history. “Conspiracy” itself is a memorable episode, involving Captain Picard and the crew of the Enterprise-D uncovering a plot by parasitic aliens to infiltrate the highest levels of Starfleet. Captain Scott was part of a group that suspected the conspiracy was taking place, although she ultimately was taken over by one of the creatures herself. Tryla Scott was the first Black female captain shown in the franchise, and the brief backstory she was given in “Conspiracy” also detailed how she was the fastest person in Starfleet history to attain the rank of captain, making her a Star Trek legend for a variety of reasons.

Related: Star Trek: Every Captain Who Became An Admiral

Played by actress Tricia O’Neil, Captain Rachel Garrett is another often-forgotten captain who played an important role in franchise history. Captain Garrett is the only woman to ever command a version of Star Trek’s most famous ship, the USS Enterprise. Garrett was captain of the Enterprise-C and was featured in the classic Star Trek: The Next Generation episode, “Yesterday’s Enterprise.” During the episode, the Enterprise-C’s accidental time travel 22 years into the future created an alternate timeline where the Federation was involved in a long and bloody war with the Klingons. When this was discovered, Garrett agreed to pilot her ship back through the temporal rift it had come through to restore the timeline but was unfortunately killed by an attacking Klingon vessel before she could do so. Her helmsman, Richard Castillo, eventually took the ship back through and restored the timeline. Although “Yesterday’s Enterprise” is an extremely popular episode among fans, Captain Garrett rarely receives the recognition she deserves as the only female captain of the Enterprise.

Silva La Forge’s inclusion in The Next Generation is significant for two reasons. Firstly, she was the mother of Geordi La Forge and provided some interesting context to the character’s life in the season 7 episode “Interface.” Unfortunately, the episode also involved her disappearance and presumed death while commanding the USS Hera, something that affected Geordi greatly and almost compromised his ability to be objective about the mission he was currently involved in. The second reason Captain La Forge is significant is that she was played by Madge Sinclair, the same actress who played the unnamed Saratoga Captain in Star Trek IV. Sinclair is the only actress to hold the distinction of playing two Black female captains on Star Trek.

Kasidy Yates-Sisko was a recurring character on Star Trek: Deep Space Nine, and the only heavily featured female captain who was not also a member of Starfleet. She was first introduced in the season 3 episode “Family Business,” and went on to become the girlfriend and later wife of Deep Space Nine’s main character, Captain Benjamin Sisko. Sisko and Kasidy’s relationship evolved throughout the course of 5 seasons, although it was tragically cut short in the series finale when Sisko was taken to the Celestial Temple to reside with the Bajoran Prophets. Outside of her relationship, Yates-Sisko was involved in commanding a fleet of transport freighters that were initially independent contractors but later worked for the Bajoran Ministry of Commerce. She became a popular character among fans, and her relationship with Sisko is arguably one of Star Trek’s greatest romances.

Captain Benteen was featured in the Deep Space Nine episodes “Homefront” and “Paradise Lost.” She was a major player in Starfleet Admiral Leyton’s plot to bring about a coup d’etat. Benteen was Admiral Leyton’s adjutant at the time until he promoted her to Captain and gave her command of the USS Lakota, ordering her to stop the USS Defiant from reaching Earth. Captain Sisko, in command of the Defiant, had information that Leyton had been manufacturing evidence of a Changling threat in Starfleet in order to take over the organization. Luckily, Benteen listened to Sisko, and after being convinced of Leyton’s treachery she helped defeat him and stop the coup from happening. Benteen was played by actress Susan Gibney, who was a recurring Star Trek player, having also portrayed the character of Leah Brahms on Star Trek: The Next Generation.

Related: Star Trek: What Happened To All 4 Starships Named Defiant

Captain Lisa Cusak was the focus of the popular Deep Space Nine episode “The Sound of Her Voice.” She was never shown on screen and was only heard through voiceover for the majority of the episode. Cusak’s ship, the USS Olympia, crashed on a planet in the Beta Quadrant in 2371, leaving her as the only survivor. Because of the metreon radiation surrounding the planet, Cusak’s distress call was unknowingly transmitted 3 years into the future, where it was received by the crew of Deep Space 9 onboard the USS Defiant. The Defiant established two-way communication with Cusak, unknowingly transmitting their messages back in time as they rushed to rescue her. Once they had reached the planet, however, they discovered what had happened, and decided to take Cusak’s body back to the station to hold a funeral for her, feeling that she had left a great impression on their lives even a short time. Cusak was voiced by actress Debra Wilson.

As previously discussed, Captain Janeway, played by actress Kate Mulgrew, was the first female captain to also be the lead on her own show. Star Trek: Voyager, which ran from 1995 to 2001, helped make Janeway an inspiration to many female Star Trek fans. As captain, Janeway guided her crew through the Delta Quadrant after the ship was stranded there because of a life form called the Caretaker. During Voyager’s run, Janeway proved herself to be a tough, smart captain who was fiercely protective over her crew. Fans of Voyager were ecstatic to learn recently that Mulgrew will be reprising her role as Janeway in the upcoming animated series Star Trek: Prodigy, which will debut on Paramount+ and be geared towards a younger audience.

Captain Hernandez was a female Starfleet captain featured on Star Trek: Enterprise. She was first introduced in the season 4 episode “Home” as the captain of the Columbia NX-02 and former love interest of Captain Jonathan Archer, the show’s lead. Later, the character of Trip Tucker was briefly a part of Hernandez’s crew when he requested a transfer off Enterprise. Hernandez and her crew were also involved in the mission to rescue Doctor Phlox from Klingon space during the Augment crisis. Star Trek: Enterprise served as a prequel to the entire franchise up until that point, and Starfleet was a much smaller operation during the show, so having one of the few featured Starfleet captains be a woman was a smart choice by the writers.

After a long hiatus, Star Trek: Discovery kicked off a new wave of Star Trek shows in 2017. The show also marked several more strides forward in representation for the franchise, including the addition of two new female captains, one of which was Phillipa Georgiou. Georgiou was introduced in the pilot as the captain of the USS Shenzhou and commanding officer of Discovery’s main character, Michael Burnham. Captain Georgiou’s life was cut short by the start of the Klingon War when she was killed by T’Kuvma during the Battle of the Binary Stars. Fortunately for actress Michelle Yeoh, however, the character was brought back later in the season, this time as Emperor Georgiou, Captain Georgiou’s Mirror Universe counterpart. Emperor Georgiou served as a recurring character for the majority of Discovery’s 3 seasons and is supposedly set to star in her own show sometime in the near future.

Star Trek: Discovery’s other addition to the list of female captains is Captain Michael Burnham, who only recently attained her rank. Burnham did not start off as captain, much like Star Trek’s other Black series lead, Benjamin Sisko. The road to the Captain’s chair was a hard one for Burnham, who began the first season of Discovery as Starfleet’s first-ever mutineer. The 3rd season’s time jump to the 32nd century, however, eventually provided her the opportunity to captain the USS Discovery. With season 4 of Star Trek: Discovery expected sometime later in 2021, fans will soon get to see what kind of captain Burnham turns out to be, including how she commands Star Trek’s first all-female bridge crew.

It is interesting to note that many of the women on Star Trek’s list of female captains are women of color, showing that the franchise’s diversity ideals have been and continue to be an important part of storylines. Additionally, there have been many female characters who have held a higher rank, such as Admiral Nechayev from Star Trek: TNG or Admiral Cornwell from Star Trek: Discovery. Although the franchise has at to have many female captains who are the main characters of their own shows, Star Trek still boasts an impressive list of women who have contributed meaningfully to Starfleet’s female leadership.