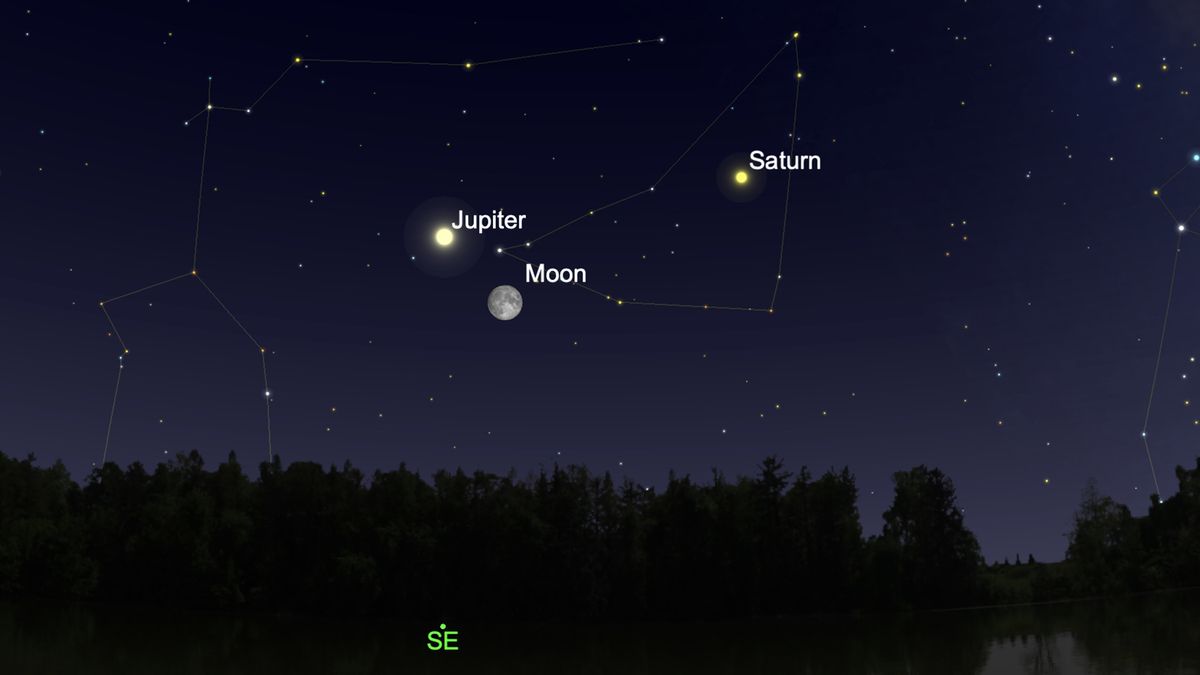 Step outside around 45 minutes after sunset on Saturday evening (Aug. 21) and in a single glance you’ll be able to partake in a gathering of the moon and the biggest planet of our solar system, very low in the east-southeast sky.

Assuming your skies are reasonably clear, you’ll be able to see the moon passing near to the planet Jupiter. By about 10:30 p.m. local daylight time, the eye-catching celestial duo will be visible, roughly one-quarter up from the southeast horizon to the point directly overhead (called the zenith). The moon will be less than 12 hours from officially turning full and will be situated to the lower right of Jupiter, a distance of roughly 5 degrees.

That’s equal to about ten times the apparent size of the moon, and that means you should be able to fit at least 10 full moons in the gap between them in Saturday’s evening sky. And yet when you see them in the sky, they’ll be seemingly much closer together because the moon appears normally twice as big to our eyes compared to what its half-degree size would otherwise suggest; indeed, an incredible illusion!

Related: Jupiter is at its biggest and brightest this week

If you know a youngster who can’t get enough of the moon, then they’ll be delighted with views through the Orion GoScope II. Revealing craters and seas up close, this little telescope comes with a carry case and moon map.View Deal

Point this “dynamic duo” out to your friends on Saturday evening and ask them to estimate how many moons would fit in the gap between Jupiter and the moon. Likely their response will be something like “Four … maybe five.” Then watch the look of incredulity that spreads across their face when you reveal that the correct answer is closer to 10.

An Illusion of perspective

Keep in mind that what you’ll be seeing on Saturday evening is all a matter of perspective. Jupiter is 373 million miles (600 million kilometers) away from Earth, while the moon is only 233,000 miles (375,000 km) distant. As a result, the moon appears to move much faster (its own diameter per hour) against the starry background compared to the giant planet.

But on Saturday night, they will be aligned as seen from our Earthly perspective to make them appear as eye-catching sights in our sky

And as a result of its more rapid movement, on Saturday evening, the moon will change its position rather noticeably relative to Jupiter. Right after sunset, Jupiter will appear to the upper left of the moon. By 1 a.m. local time, Jupiter will “top” the moon, appearing almost directly above it. And by 5 a.m. Sunday morning, as both are about ready to call it a night low in the west-southwest sky, Jupiter will have shifted to a position to the upper right of the moon.

A red spot and four other moons to view

If you have a telescope or high-power binoculars, make sure to train your sights on Jupiter, a prime attraction best observed between 11 p.m. and 2 a.m. when it’s high in the sky and its image reasonably calm.

Jupiter was at opposition to the sun during the overnight hours of Aug. 19-20, meaning it was at its biggest and brightest of the year. As such, you can observe Jupiter from dusk to dawn throughout the remainder of this month. Dark belts, light bands and many other features (sometimes referred to as “garlands” and “festoons”).

Over the past 30 years or so, Jupiter’s famous Great Red Spot has gone from oval to a more circular shape, while displaying a plush orange-red coloration. It will appear nearly dead-center on Jupiter’s disk at around 11 p.m. EDT on Saturday night (0300 on Sunday, Aug. 22 GMT).

On Sunday (Aug. 22) observers with telescopes across Eastern Europe, eastern Africa, and Asia can watch the small black shadows of two of Jupiter’s moons cross the planet’s disk at the same time. At 8:42 p.m. CEST (1842 GMT), Ganymede’s large shadow will join Europa’s smaller shadow already crossing. The two shadows will appear together for two hours until Europa’s shadow moves off at 10:40 p.m. CEST (2040 GMT), leaving Ganymede’s shadow to complete its transit at 12:20 a.m. CEST (2220 GMT). In eastern Asia, the double shadow event will be observable during the wee hours of Monday morning. (Image credit: Starry Night)

And Jupiter’s four bright Galilean moons are always performing. They seem like small stars, though two of them are really larger than our own moon. It’s indeed possible to watch them change their positions relative to each other from hour to hour and from night to night.

In fact, if you look at Jupiter with a small telescope or even steadily held binoculars on Saturday evening, you’ll see all four of those big satellites. On one side of Jupiter will be the moons Callisto and Io (much closer to Jupiter), while on the other side you’ll be able to see the biggest of the four (Ganymede) and the smallest (Europa) engaged in an incredibly tight conjunction. The two will appear closest together at around 11:30 p.m. EDT (0330 GMT), when Europa will be passing less than 3 arc seconds above Ganymede — so closely spaced that binoculars and low-power telescopes will likely show them as a single object. But only a couple of hours before and after this time, both should be readily visible in smaller instruments.

And if clouds hide your view of Jupiter and the moon, you’ll have another chance to see them near each other again on Sept. 17-18.

Editor’s note: If you snap an amazing photo of the Jupiter and the moon in August 2021 and would like to share it for a story or photo gallery, send images and comments to spacephotos@space.com!

Joe Rao serves as an instructor and guest lecturer at New York’s Hayden Planetarium. He writes about astronomy for Natural History magazine, the Farmers’ Almanac and other publications. Follow us on Twitter @Spacedotcom and on Facebook.