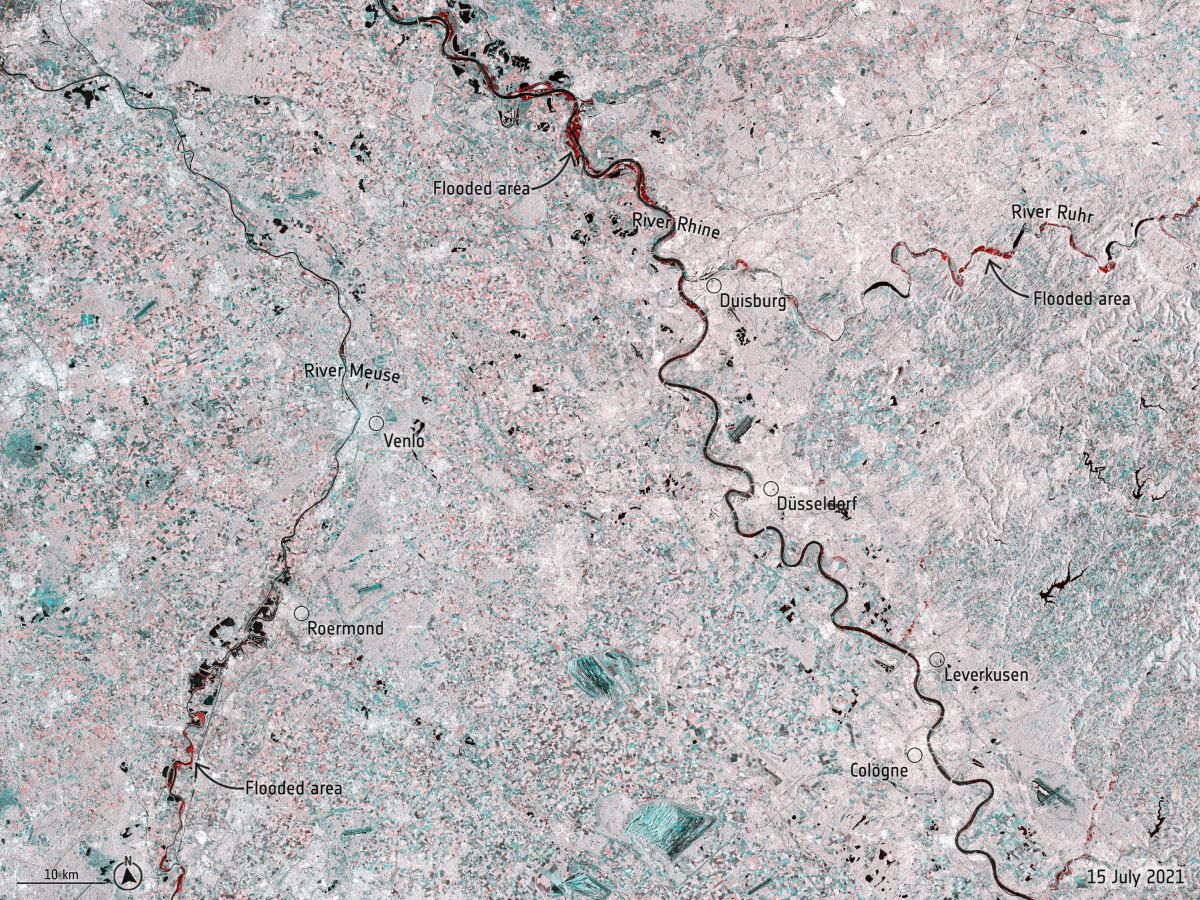 Sobering images from space show the impact of devastating floods in Germany and Belgium that have left more than 100 people dead.

While the rain that caused the floods is expected to ease this weekend, search and rescue efforts remain hampered in the two countries. Officials say that the rising waters are in large part due to global warming, according to the New York Times.

The Copernicus Emergency Management Service, which includes participation from the European Space Agency (ESA), first forecast a “high probability of flooding” on July 9, according to the service’s website. Copernicus has been sending out alerts and forecasts regularly to European emergency authorities to try to stay ahead of the flooding as best as possible.

Related: Smoke from wildfires in Oregon and beyond covers vast areas of US

We’ve just sent the commands to both @CopernicusEU #Sentinel1 satellites to gather more data over the weekend on #Flooding in EuropeData from the Sentinel-1 missions are already in use by @copernicusEMS to provide #RapidMapping of the flood extent to teams on the ground pic.twitter.com/bTyygKFC1vJuly 16, 2021

The forecasts depend on accurate and timely satellite imagery from any available source. One prominent European example is the Sentinel 1 mission, which began in 2014 and includes a pair of polar-orbiting satellites that map Earth using synthetic aperture radar. Radar allows the satellite to peer through clouds, which makes it a useful tool during rainy and flooding conditions.

“Radar data from our Sentinel-1 will be used to map flooded areas to support first responders,” tweeted Thierry Breton, the European Commission’s commissioner for internal market, on Thursday (July 15). “Thoughts with those affected.”

Sentinel-1 has already been tasked to gather more information about the floods over the weekend, the ESA Operations account tweeted on Friday (July 16).

Related: A ‘wobble’ in the moon’s orbit could result in record flooding in the 2030s

Dramatic #floods are affecting Germany and Belgium.The EU Space Copernicus #Emergency Management Service has been activated for both countries. Radar data from our Sentinel1 will be used to map flooded areas to support first responders.Thoughts with those affected. pic.twitter.com/tvaKkXnjTcJuly 15, 2021

Another useful tool for forecasters has been Meteosat 11, one of a series of European weather forecasting satellites allowing a continuous series of data since 1977. Long, consistent satellite datasets are useful for making predictions about global warming and other long-term changes in Earth’s climate. Further, Meteosat-11’s geosynchronous orbit around Earth allows it to image the same zone of our planet consistently, as its orbit approximately matches the Earth’s rotation.

Meteosat 11 is operated by EUMETSAT, the European satellite agency that monitors weather, climate and the environment from space. EUMETSAT has been providing regular updates on the flooding through its Twitter account, using a range of satellites and prediction products.

The slow moving persistent upper-level low that brought the long-lasting intense rainfall which caused the deadly #flooding in Germany & many parts of W Europe this week can be clearly in satellite imagery. First this loop of Airmass RGB & @HydroSAF precip rate 1/2 pic.twitter.com/dbOVRJjCfSJuly 16, 2021

“The slow moving persistent upper-level low that brought the long-lasting intense rainfall which caused the deadly #flooding in Germany & many parts of W[est] Europe this week can be clearly in satellite imagery,” the EUMETSAT Users account tweeted Friday, including an animation of clouds swirling over western Europe.

A third generation of the Meteosat series is under development to “guarantee the continuity of data for weather forecast … over the next two decades,” ESA’s Space Transportation office tweeted Thursday. The new series will include new capabilities including lightning imaging, and atmospheric “sounding” to monitor changes at different altitudes, according to EUMETSAT’s website. The first of the new series is scheduled to launch in late 2022, with two others following in 2024 and 2025.

ESA’s Earth observation Twitter account has also been documenting the flooding, using Copernicus imagery. “This radar image uses information from two separate acquisitions captured by @copernicusEU Sentinel 1 (on 3 July and 15 July 2021) to show the extent of the flooding in red,” the account said on Friday, with a radar image showing water spreading in Germany.