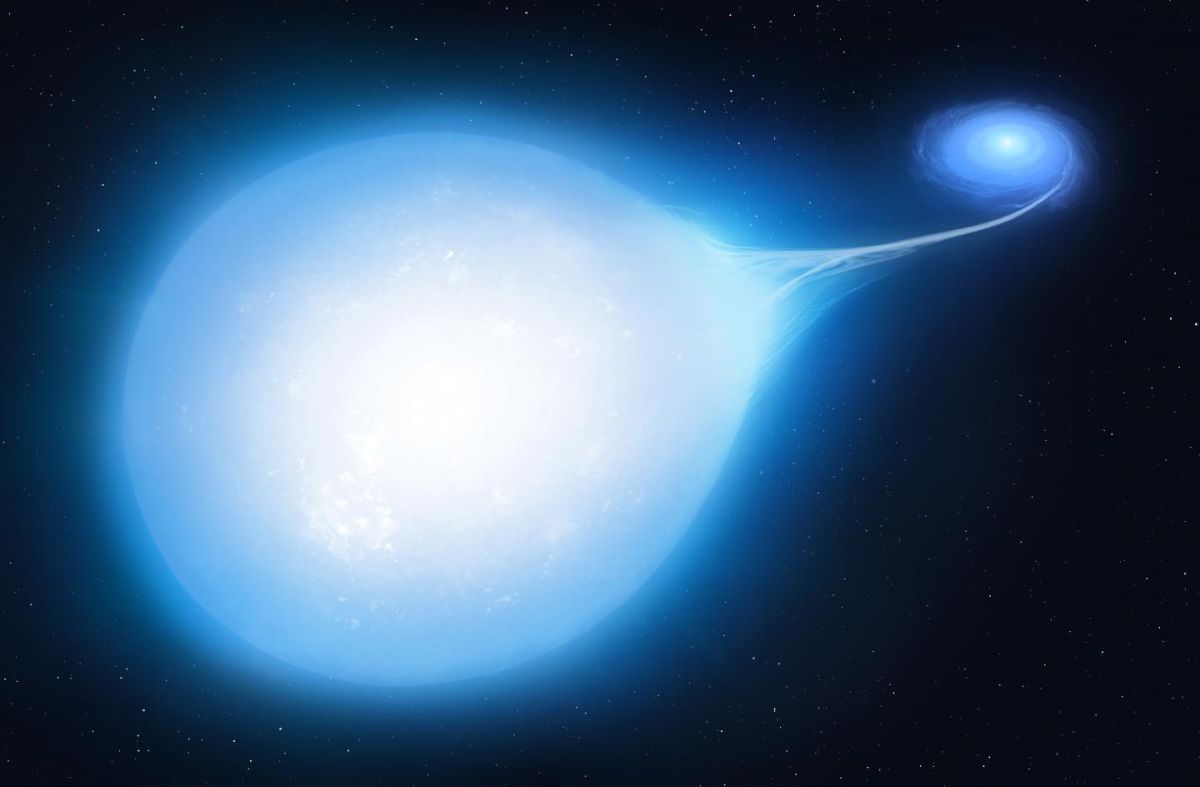 Astronomers have discovered a rare, teardrop-shaped star swirling through the cosmos some 1,500 light-years from the sun.

Why does the star cry? Because it is in a toxic relationship with a partner that is literally ripping the life from its body. In stellar relationships like these, there is no amicable uncoupling; the romance only ends when both stars explode in a violent, thermonuclear explosion that’s visible across the galaxy. You’d cry, too.

But astronomers (cosmic paparazzi that they are) are fired up about this twisted stellar relationship. The star system, named HD265435, is one of only three known binary star systems in the universe — and the closest one to Earth — that is clearly destined to end in a Type Ia supernova, according to a study published July 12 in the journal Nature Astronomy.

These types of stellar explosions occur when a white dwarf (the shriveled husk of an old, collapsed star) shares an orbit with a larger, younger star that still has some fuel left to burn. Small but gravitationally massive, the white dwarf gladly gobbles up this fuel, yanking so much matter away from its companion that the younger star begins to change shape from a sphere into an ellipse, or teardrop. The older star grows larger and larger over millions of years, finally becoming too big for its own good. Nuclear reactions reignite in its core, the dwarf goes boom and both stars become an irradiated smudge of gas and dust in the night sky.

Supernovas are easy enough to spot once the blast goes off (one infamous explosion lingered in Earth’s sky for 23 days and nights in A.D. 1054), but finding the doomed star systems that lead to Type Ia explosions is much trickier. That’s partly because white dwarfs are extremely dim and small, packing the mass of a sun into a ball about as wide as Earth, according to NASA.

Finding a dwarf’s ill-fated companion star isn’t much easier, but because these younger stars tend to be much brighter, they offer a few telltale clues, the authors of the new study wrote. One is an “ellipsoid” shape, suggesting that something massive is tugging on one side of the star and deforming it. Another clue is a rapidly pulsing light signature, which hints at a binary system where two stars are orbiting each other extremely closely and quickly.

Using observations from NASA’s Transiting Exoplanet Survey Satellite, the researchers discovered that HD265435 fit both criteria. From these details, the team calculated the bright star’s distance and mass, which allowed the researchers to make some informed estimates about the size and age of the young star’s invisible companion star.

These two stars fully orbit each other once every 90 minutes or so, indicating that they are extremely close and will probably merge completely millions of years from now. Together, the pair has the right total mass to suggest that a Type Ia supernova is on the horizon — just another 70 million years or so away, the authors concluded.

Obviously, none of us will be around to watch this stellar duo fall apart (or rather, blow apart). But finding real-world examples of binary systems doomed to go boom is no easy feat, and studying them could help astronomers better understand the still-mysterious mechanisms that power these tremendous cosmic explosions. Perhaps sadly for HD265435, that means the paparazzi lenses of Earth’s space telescopes will be trained on the star system’s messy relationship for ages to come.