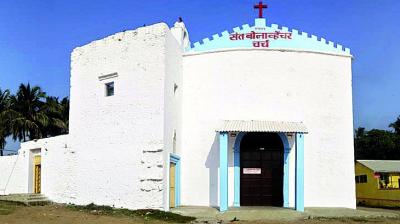 Once you disembark, you can catch a rick, but be warned: they don’t ply by the meter.

Until a few years ago, most corporate offsites would succumb to the lure of the Madh Island’s Retreat Hotel and its ersatz resort vibe. The area was one of Mumbai’s dirty weekend haunts as well as the location for film units to shoot “bungalow scenes” at the local holiday homes. As high-rises begin to dot the landscape, Madh Island is slowly turning into a suburb, which means it is also more accessible by road and by sea.

If you want to escape manic Mumbai over the weekend, it remains one of the easiest options.

The road trip is now an obstacle course courtesy the Metro construction and near perpetual bottlenecks on the Western Express Highway. It’s cheaper and far quicker to get to the Versova jetty and take the ferry across. A ticket on the junta ferry costs only Rs. 5. The slightly better maintained ferry is a princely Rs.10. Both will deposit you across at the Madh Island Jetty in a couple of minutes, but you will have to brave the putrid stench of the polluted ocean on this stretch.

Once you disembark, you can catch a rick, but be warned: they don’t ply by the meter. The starting price for any distance is Rs. 80, and you can try to bargain but there is really no option, so you’ll have to quit haggling and give in. Alternatively, you can rent a bicycle from one of the local shops at Versova before you take the ferry across.

Marve and Aksa beaches heave with tourists on weekends but have plenty of street food stalls and the typical Mumbai beach paraphernalia. The lesser-known beaches of Erangal and Dana Pani are less crowded and, if you time your visit right, you could have the entire beach to yourself. These beaches are mostly clean and easy to access but don’t have food stalls or facilities on the beach so they are as bare and basic as it comes.

While you could stay at the Retreat or the Resort at Madh Island for a weekend staycation, there are plenty of bungalows that offer the Airbnb experience like Shubham, Aashiyana Villa, Arpita’s bungalow, or Umesh’s Villa. Apartments at Raheja Exotica also show up on Airbnb, and if you choose a higher floor the sea view is guaranteed. Andy’s 1979 Boutique Hotel on the Madh Marve Road is an option if you want to rent an upscale cottage. They also offer dining on site.

As its name suggests, the Retreat Hotel and Convention Centre near Erangal Beach is more of a convention hotel, and a recent visit suggests its glory days are perhaps in the past. The hotel’s all-day dining café, Tangerine, and its Chinese restaurant, The Oriental Bowl, have poolside views that rank higher than the quality of the food.

You could also try the themed cafés (High Tide, Bay Watch, and Pool Side) at the Resort Hotel in Aksa Beach, Madh-Marve Road. While the food is standard café fare, the views score one up over the Retreat, as you can see the beach from here.

Standalone restaurants such as Café Laguna near the Raheja Exotica buildings make up for a lack of a view with their ambience and menu.

St. Bonaventure’s Church is a Portuguese era Franciscan church built in 1575 AD. It is right on Erangal beach and hard to miss as it’s painted a bright white with blue trim and has squawking parrots perched on its window sills. This imposing church was in use until the Maratha Invasion of 1739. After the invasion, when the church was in ruins, annual celebrations were held only once a year. It was only in 1976 that the Madh Church parish priest had the church renovated and regular church services resumed. On the second Sunday of every January, the Ergal cha Sann (or Erangal Festival) sees thousands gather for food and celebrations as the native East Indians venerate St. Bonaventure. Born in 1221, in Italy, he was known as the prince of mystics, made a cardinal in his lifetime, and was canonized a saint shortly before this church was built.

Madh Island offers the perfect low commitment dial-down from the big city. After a weekend of long beach walks and stirring seaside views, returning to Mumbai may prove hard. But you can always return the next weekend.