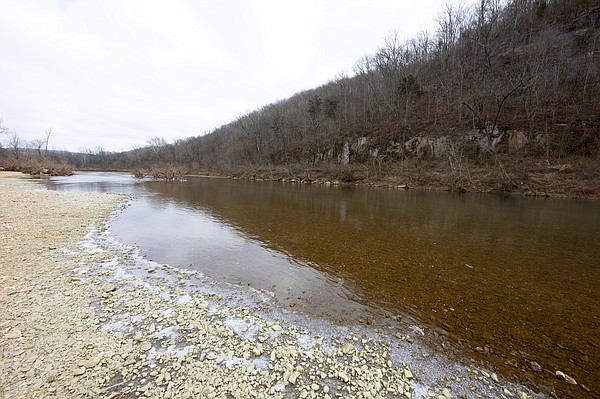 Outdoor writer and photographer Corbet Deary is featured regularly in The Sentinel-Record. Today, Deary takes readers on a journey to Gilbert.

One automatically thinks of crystal-clear rivers contained by sheer limestone bluffs and jagged mountainous terrain, when the Ozarks are mentioned, and rightfully so.

I, too, gravitate toward the northern extremities of the state to experience its scenic beauty. In fact, this section of the state is the go-to place if one is looking for waterfalls and incredible vistas.

That being said, the Ozarks are also bountiful with quaint little towns that are rich in history. Some have fizzled out throughout history, and consist of nothing more than a few dilapidated structures.

Some, on the other hand, have managed to weather the change of time, and are still up and going.

Located just north of Marshall, Gilbert is one of such locations. Situated on the banks of the Buffalo River, this town is a popular destination, especially during the spring, summer and fall, when folks head to the Ozarks by the droves, to float this scenic, nationally renowned waterway.

However, there was a time when Gilbert did not depend upon recreation as its bread and butter. In fact, the town originally came to fruition as a hub for commerce.

To refer to Gilbert as a small town would not be a stretch, as the population sign, located at the city limits, boast a staggering 33 residents. But its numbers were noticeably larger back in the day.

Gilbert’s story began in 1902, as a result of the construction of the Missouri and North Arkansas Railroad. The route began at Seligman, Mo., and would traverse 303 rugged miles to Helena.

The town and its name honored Charles W. Gilbert, who served as the treasurer for the company which was building the railroad.

The Gilbert General Store has an interesting history. The business was actually built one year prior to when the Gilbert Community came to fruition, and was known by locals as the Mays Store.

William Mays opted to move his store and post office, from the nearby community of Duff, to Gilbert in 1906. The business has since experienced a name change, and is presently known as the Gilbert General Store. Listed on the National Register of Historic Places, under the name of Mays Store, the business is still in operation today.

Gilbert eventually hosted a repair shop for the railroad, and remained a hub for a number of years. And, during its heyday, continued to grow. There was a time when there were enough residents to support four stores.

Two hotels welcomed visitors, and an Eagle Pencil Company mill was in the area, as well. Several sawmills provided folks with lumber and three doctors provided the locals with health care.

Of course, it was essential to provide an opportunity for education. In turn, the Gilbert School District was formed in 1921. Land, for the schoolhouse, was provided by Eli Jordan, while local residents made monetary donations to be used for lumber and other supplies. Those with the means of hauling the lumber provided their services, while those with the know-how built the school.

One would suspect that a portion of the Gilbert residents was also concerned about their spiritual well-being, as well. And in turn, one would also suspect that there were various places of worship within close proximity.

But the Rev. John Battenfield and his congregation eventually showed up at Gilbert with aspirations of a “self-sufficient community to survive the return of the Messiah.”

He and his followers built a church and erected a building, constructed of native stones, that would serve as the print shop for “The Kingdom Harbinger,” their weekly newspaper.

Battenfield’s prophecy was obviously a few years ahead of time. He and his followers evidently grew restless, as they left Gilbert in 1925, in search of yet another location where they might survive the return of the Messiah.

Gilbert remained a hub for commerce for a number of years, as cotton, grain, ore and logs were transported by rail. But following a decline in the logging industry, the railroad suffered. And in turn, the young, booming, little town suffered, as well.

The railroad eventually ceased operation and the tracks were removed and sold as scrap. And with the loss of the railroad the town also began to dwindle.

Although Gilbert residents no longer hear the shrieking sound of steel idlers rolling along the rails, a lonesome horn in the distance, or the buzzing sound of saws chewing through logs, there are still remnants that are reminders of another era of time.

A beautifully maintained rock structure, that once served as the print shop, is situated within a stone’s throw of the city limit sign. The church, located near the print shop is also immaculately maintained and provides folk with a reminder of yesteryear.

Located atop a hill, along the edge of Frost Street, the cemetery is a testimony to a time when the town was far larger than it is at present. And although the era when the rails ran through this quaint little town is nothing more than a memory, the remnants of the tram still serve folks today, as a trail system.

The designated path makes a pleasant 3.4-mile round-trip journey. The route makes its way alongside the beautiful river that helps sustain this quaint little community today.

Connoisseurs of art likely gravitate to the local art gallery, folks fellowship and break bread at the local cafe, and I suspect it’s not uncommon for residents to stop in at the General Store for a snack and a drink. And I wouldn’t be surprised if conversations pertaining to the weather occur, as Gilbert is recognized as one of the coldest towns in Arkansas.

Those calling Gilbert home are also in close proximity of an experience that the middle-aged can only recall and the younger generation can only imagine. I’m talking about watching a movie on a 72-foot screen. That’s right, they are located within 20 miles of one of only three drive-in theaters that are still in operation throughout the entire state of Arkansas.

Yep, Gilbert is one of those little towns that managed to beat the odds and withstand the test of time. And although it has experienced its fair share of change throughout the years, it has maintained a quaintness, deeming it a special destination.

The Gilbert General Store has been in existence since the early 1900s and is on the National Register of Historic Places. – Photo by Corbet Deary of The Sentinel-Record