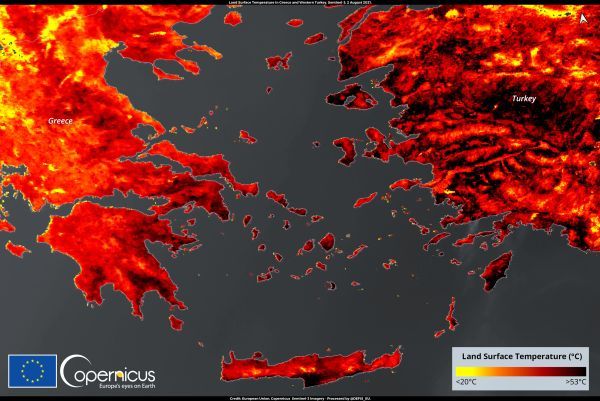 July 2021 was officially the hottest month in recorded history, according to new data released Friday (Aug. 13) by the National Oceanic and Atmospheric Administration (NOAA).

Last month, the combined land and ocean-surface temperature was 1.67 degrees Fahrenheit (0.93 degrees Celsius) higher than the 20th-century average, blowing past the previous July heat record tied in July 2016, July 2019 and July 2020. But July 2021 was not only the hottest July ever — it was also the single hottest month since record keeping began 142 years ago, NOAA found.

“In this case, first place is the worst place to be,” NOAA Administrator Rick Spinrad said in a statement. “This new record adds to the disturbing and disruptive path that climate change has set for the globe.”

The agency’s report found that the Northern Hemisphere was particularly scorching, with land-surface temperatures measuring 2.77 F (1.54 C) above average — an “unprecedented” heat anomaly never seen before, according to the NOAA statement.

A map showing some of the many heat records and extremes surpassed in July 2021. (Image credit: NOAA)

At least five heat domes descended on various parts of the hemisphere at once, resulting in consecutive days of stagnant, sweltering heat. Asia saw its hottest July on record (surpassing a previous record set in 2010), while Europe saw its second-hottest July (trailing behind July 2018). Record high temperatures were also recorded in Turkey, Japan, Ireland and many other jurisdictions.

These July records suggest that 2021 will almost certainly rank amongst the hottest years on record so far, NOAA added.

The first half of August already fits that prediction. On Wednesday (Aug. 11), a weather station on the Italian island of Sicily registered temperatures of 119.85 F (48.8 C) — the single hottest temperature ever recorded in Europe.

July is typically the hottest month of the year, but human activities are “unequivocally” driving climate change to ever higher extremes, a major report from the United Nations’ Intergovernmental Panel on Climate Change (IPCC) said on Monday (Aug. 9).

Related: The devastating wildfires of 2021 are breaking records. Satellites are tracking it all.

Only by drastically — and quickly — reducing global greenhouse gas emissions can humans hope to limit the future impacts of global warming on Earth, the IPCC report concluded.