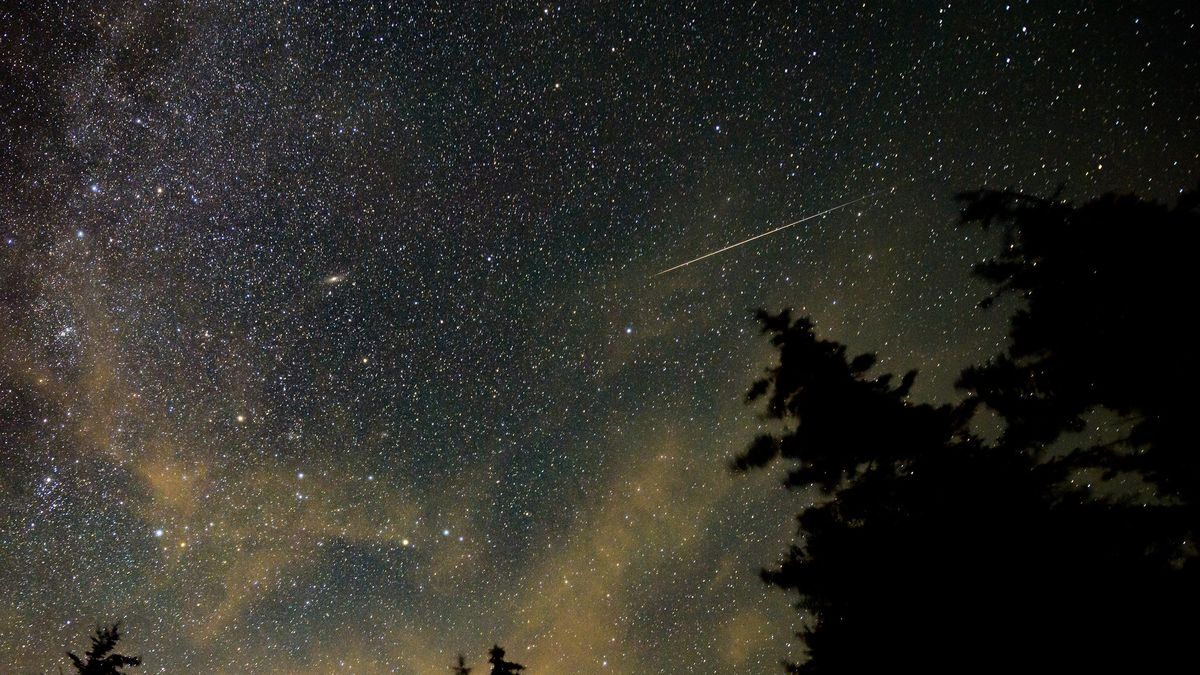 If you take a cool photo of the 2021 Perseid meteor shower let us know! You can send images and comments to spacephotos@space.com.

The pinnacle of the annual performance of the Perseid meteor shower is at hand, with peak activity of this display occurring late tonight (Aug. 11) into the early hours of Friday morning (Aug. 13).

The Perseids will appear to dart from a region of the sky near the famous double star cluster in the northern region of the constellation Perseus, which will be ascending the northeast part of the sky through the overnight hours tonight.

Some sources have said that Wednesday night into Thursday morning was the peak of the shower, however, in my recent column here, I pointed out that according to the International Meteor Organization (IMO), Earth would be encountering maximum activity from 3 p.m. to 6 p.m. EDT (1900-2200 GMT) on Aug. 12 — corresponding to the mid-to-late afternoon hours for North America.

Webcasts: Perseid meteor shower 2021: How to watch it live tonight

If you were clouded out last night, do not despair. You may get another chance late tonight into early tomorrow, depending on your local weather.

You can also watch the Perseid meteor shower via webcasts from several sources, including NASA, the McDonald Observatory and the Virtual Telescope Project. You can see our full Perseids 2021 webcast roundup here.

This map from Sky & Telescope magazine shows where to look in the night sky to see the Perseid meteor shower of 2021. They appear to radiate from the Perseus constellation in the northeastern sky. (Image credit: Sky & Telescope illustration)

Those who are hoping for a good view of the 2021 peak of the Perseids in the U.S. should find the best probabilities for clear skies over the Pacific Northwest, California, the Intermountain Region, northern High Plains, Upper Midwest, as well as central and eastern Texas, southeastern Oklahoma and much of Arkansas. Yet another zone offering good weather prospects may be along the coasts of the Carolinas, Georgia and the central Florida peninsula.

All of these regions should see mainly clear skies during the predawn hours of Friday. Exceptions may be found right along the immediate Pacific coast where a marine layer could cause low clouds and areas of fog. But this situation can be remedied by traveling inland where cloud cover and fog will break and skies will clear.

Partial cloudiness, still affording good breaks or intervals of generally clear skies will be found over the central High Plains, parts of west and north Texas, central Oklahoma, the Deep South and Southeast including the Florida Panhandle, the lower Ohio Valley, Appalachia and the Atlantic Corridor.

Unfortunately, a cold front draped across northern New England and northern New York, south and west across the lower Great Lakes to the nation’s heartland and the central Rocky Mountains, will likely bring considerable cloud cover as well as scattered showers and thunderstorms, which will all but obscure a view of this year’s Perseid performance. Those who live in south Florida may also experience being shut out of a view of the midsummer “shooting stars” thanks to clouds and precipitation heralding the approach of Tropical Storm Fred from north of Cuba.

Of course, we stress that our national outlook is only a generalization — a “broad-brush look” at sky conditions from coast to coast. For a more detailed and localized outlook, we suggest checking the latest updated forecast from your local National Weather Service (NWS) office. Click here to go to the NWS organization page and find what region you are located in (i.e., Central, Eastern, Southern, Western) and then find your state and which forecast office covers your particular area.

The wildfires that have raged for the past several weeks across parts of the western US and Canada, have put up a swath of smoke and haze that has encompassed much of North America. This has made skywatching problematic, even for places that have mainly clear skies.

Depending on the thickness of the haze and smoke (which changes on a daily basis), viewers have noticed both the light of the sun and moon attenuated and taking on shades of yellow, orange and red even when they are high in the sky. Stars have also appeared dimmer because they are shining through smoke and haze. This could also be a factor in the number of meteors that are seen; the light of many of the fainter streaks may end up being squelched by the smoke and haze layer.

Fortunately, a good number of the Perseids are bright and likely will still be able to shine through. Again, however, a lot depends on what conditions are locally where you are. You can check on an interactive fire and smoke map showing where the smoke layer is densest, as well local air quality by clicking here.

Joe Rao serves as an instructor and guest lecturer at New York’s Hayden Planetarium. He writes about astronomy for Natural History magazine, the Farmers’ Almanac and other publications. Follow us on Twitter @Spacedotcom and on Facebook.