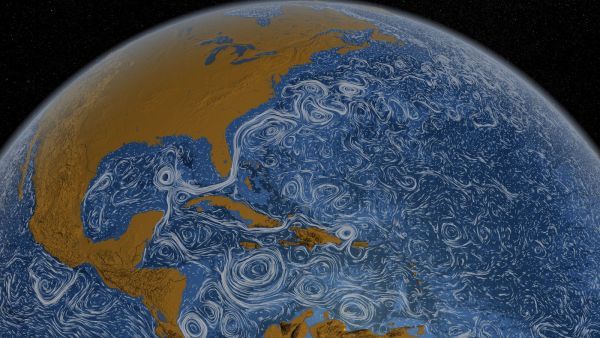 One of the most crucial ocean current systems for regulating the Northern Hemisphere’s climate could be on the verge of total collapse due to climate change, a new study has revealed.

The Atlantic Meridional Overturning Circulation (AMOC), which includes the Gulf Stream and is responsible for moderating large parts of the world’s climate, has undergone “an almost complete loss of stability over the last century”, according to a new analysis. The currents work like a conveyor belt to transport warm, salty water northward from the tropics and cold water back south along the seafloor. This giant conveyor belt had already been shown to be at its weakest in more than a thousand years, but now it could be veering toward a total breakdown.

Such a collapse would have a disastrous impact on global weather systems, leading to sea-level rises in the Atlantic; greater cooling and more powerful storms across the Northern Hemisphere; and severe disruption to the rain that billions of people rely upon to grow crops in Africa, South America and India, according to the U.K.’s meteorological office.

Related: 10 signs that Earth’s climate is off the rails

The study author believes that this transition could occur rapidly after the ocean current system is driven beyond a critical tipping point.

“The findings support the assessment that the AMOC decline is not just a fluctuation or a linear response to increasing temperatures but likely means the approaching of a critical threshold beyond which the circulation system could collapse,” author Niklas Boers, a researcher at the Potsdam Institute for Climate Impact Research in Germany, said in a statement.

Data taken from past analyses of Atlantic ice cores and other geological records show that the AMOC can exist in two stable states: a stronger, faster state that humans rely upon today and another that is much slower and weaker. According to Boers, the existence of the two states implies that “abrupt transitions between the two circulation modes are in principle possible.”

This means that the current as we know it could weaken until it reaches a tipping point, flipping from the stronger state to the weaker one. This will rapidly transform climates across the Northern Hemisphere to be much less temperate than they are right now.

The Gulf Stream current (red) speeds warm water up the eastern coast of the United States, where it clashes with cold water in the North Atlantic. (Image credit: NASA Earth Observatory)

The new study attempts to resolve a hot topic of debate among scientists who investigate ocean currents: whether the AMOC’s recent weakening means it will simply circulate a little bit more slowly but in a way that humans can reduce through lowering carbon emissions, or if it means the AMOC is about to flip to a permanently weaker form that could not be reversed for hundreds of years.

“The difference is crucial,” said Boers. If it’s the latter, that would mean “the AMOC has approached its critical threshold, beyond which a substantial and in practice likely irreversible transition to the weak mode could occur.”

In bad news for the planet, after analyzing the sea-surface temperature and salinity patterns of the Atlantic Ocean, the study researchers concluded the weakening of the current across the last century was more likely to be associated with an irreversible loss of stability.

This is because the AMOC’s ability to circulate is highly dependent on salty water flowing from the south being able to sink below and displace colder northern water. And that in turn depends on the southern water being denser than the water in the north to keep the cycle going.

Ocean water density depends largely upon its temperature and saltiness. Currently, the more salty southern part of the current gets colder — and therefore denser — as it gains latitude. As the southern waters cool to the same temperatures as the northern waters they are flowing towards, the extra density brought by the additional salt allows the water from the south to sink below the less salty northern water, consequently pushing it southwards in an endless global conveyor belt.

But now that hotter temperatures and an inflow of freshwater from melting ice sheets have made the water warmer and less salty, the current is becoming increasingly less dense and less able to sink. This could threaten to stop the entire flow of the AMOC and create a devastating, and irreversible shift in global climate systems, the researchers said.

The critical threshold after which the collapse occurs could be reached much sooner than scientists first thought, according to Boers.

“I wouldn’t have expected that the excessive amounts of freshwater added in the course of the last century would already produce such a response in the overturning circulation,” Boers said in the statement. “We urgently need to reconcile our models with the presented observational evidence to assess how far from or how close to its critical threshold the AMOC really is.”

The team added that, though the strength of the contributions made by the varying factors to the current’s slowing had yet to be weighed against each other, all of the factors were connected to human-caused climate change.

The researchers published their findings Aug. 5 in the journal Nature Climate Change.