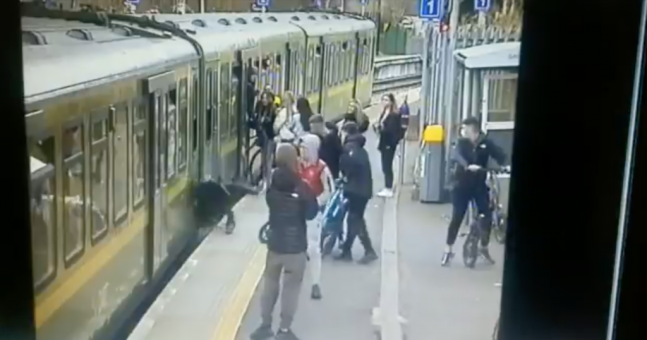 THE GANG filmed pushing a young woman under a train carriage at a station in Dublin have been “terrorising people since last March.”

An unnamed source told Dublin Live that the group have been running riot across the capital since the Covid-19 pandemic began.

Worse still, they apparently feel they are “untouchable” because their age means they would escape any serious criminal charges.

It comes after fresh footage of the incident was shared online.

The new video offers a clearer look at the terrifying incident, which occurred at Howth Junction in Dublin last month.

The woman involved was lucky to escape with her life after a hooded teenager knocked her down onto the railway line as she ran for a train.

In the video, she can be seen falling underneath the waiting locomotive and onto the tracks below.

A young man can be seen using the wheel of his bicycle to trip the woman, an act that could very well have killed her had it not been for a number of quick-thinking passers-by.

Once she falls beneath the train, some horrified on-lookers rush over before a rail-worker eventually pulls the woman up and back onto the platform to safety.

The teenagers, most of whom look unfazed by the whole ordeal, can be seen casually making an escape.

According to Dublin Live’s source, the gang are from north Dublin and have been involved in a string of incidents.

“They travel around Dublin looking to cause trouble, looking to start fights,” the source said.

“They beat up a girl out in Malahide followed by a boy there a few weeks later, this was before this attack at Howth Junction.

“The same gang have been terrorising people since last March and it’s only a matter of time before someone is killed.”

My parents and my nieces were just there today.

This is no world where I want my beautiful young nieces and any other child to grow up in.

RT as much as possible as faces can be seen.

The new footage of the attack went viral on Twitter after being shared by Irish academic and Oxford University lecturer Dr Jennifer Cassidy who shared the video in the hopes of bringing those involved to justice.

“Absolutely disgusting, illegal behaviour,” she wrote alongside the clip.

“This is no world where I want my beautiful young nieces and any other child to grow up in. RT as much as possible as faces can be seen.”

“I am still, like so of many of you, sickened and disgusted by what these group of boys from Dublin did,” she continued in another clip.
“Abhorrent behaviour on every level. Thank you all for continuing share so widely and continuously. These “boys”/criminals need to be identified and held directly accountable.”

Gardaí have launched an investigation into the incident but no arrests have yet been made.