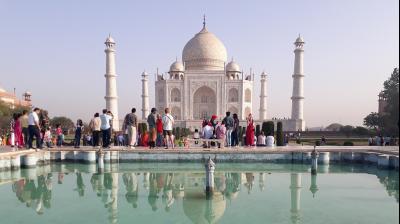 An online travel website reported that Dharavi’s slums have become more popular that the iconic Taj Mahal among foreign tourists.

India’s biggest tourist attraction has always been the majestic Taj Mahal, one of the world’s seven wonders. But unexpectedly, Dharavi, Asia’s largest slum based in Mumbai has trumped the majestic Taj to become the favourite destination for tourists coming to India.

Apparently the “world’s largest travel site,” TripAdvisor, stated that more and more international tourists are interested in seeing the slums in Dharavi. Dharavi conducts walk-through tours for small groups to give tourists a glimpse of the lives of slum-dwellers in India, reported Vice India.

The tour including ‘attractions’ such as the slum’s business hub, which showcases pottery craftsmen, and lather shops. These tours are so popular that TripAdvisor reported that these tours top the ‘Traveller’s Choice Experiences 2019 – India’ list, beating the bike tours of old Delhi. These walk-through tours have also featured in Top 10 Asia list, bagging 10th rank after the jungle swing in Ubud, Bali, and a biking tour in Tokyo.

These statistics were generated by a computer-based algorithm that takes into account the reviews written by travellers in the past year. This doesn’t necessarily mean Dharavi has seen more footfalls than the Taj Mahal, which witnesses a whopping 7 to 8 million tourists annually.

Dharavi has gained a lot of popularity from being featured in award-winning films like the Oscar-winning Slumdog Millionaire and the much-appreciated Gully Boy. The tourists who visit Dharavi get voyeuristic pleasure from seeing poverty and acknowledging their own privilege. Yet, these tours are conducted very sensitively so as not to hurt the sentiments of the slum-dwellers and preserve the authenticity of the experience.