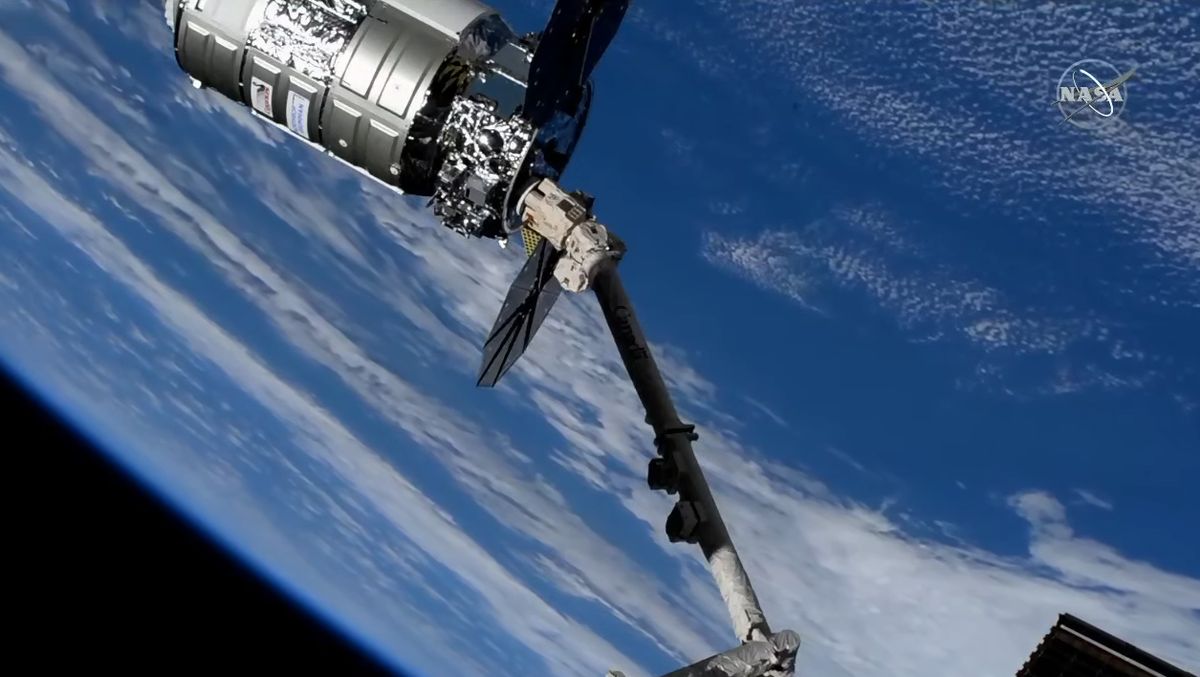 A Northrop Grumman-built Cygnus cargo ship just made its biggest delivery yet for NASA at the International Space Station.

The Cygnus NG-16 vessel was captured by astronauts wielding the station’s robotic arm at 6:07 a.m. EDT (1107 GMT) on Thursday as both spacecraft soared over the Atlantic Ocean southwest of Portugal. The Cygnus supply ship was christened the S.S. Ellison Onizuka in honor of the first Asian American astronaut Ellison Onuzuka, who was killed along with six others in the Challenger shuttle disaster in 1986.

“On behalf of the Expedition 65 crew I’m pleased to bring the Cygnus spacecraft S.S. Ellison Onizuka aboard the International Space Station today,” NASA astronaut Meghan McArthur radioed to Mission Control after grappling the cargo ship with the station’s robotic arm. “This mission enables groundbreaking research through which we hope to meet Colonel Onizuka’s challenge to enable the next generation to look out from a higher plateau.”

The spacecraft will be attached to an open berth on the station later today. You can watch that live on NASA TV starting at 8 a.m. EDT (1200 GMT).

The Northrop Grumman Cygnus NG-16 cargo ship S.S. Ellison Onizuka is captured by a robotic arm as it arrived at the International Space Station on Aug. 12, 2021 to deliver its heaviest NASA load yet. (Image credit: NASA TV)Image 2 of 2

The Northrop Grumman Cygnus NG-16 cargo ship S.S. Ellison Onizuka is captured by a robotic arm as it arrived at the International Space Station on Aug. 12, 2021 to deliver its heaviest NASA load yet. (Image credit: NASA TV)

McArthur captured the spacecraft using the Canadarm2 robotic arm, for guidance to its berthing port on the station’s Unity module. Serving as backup astronaut was the European Space Agency’s Thomas Pesquet.

Cygnus launched to the space station Tuesday (Aug. 10) from NASA’s Wallops Flight Facility in Virginia to deliver more than 8,200 lbs. (3,720 kilograms) of supplies, equipment and experiments for the Expedition 65 astronauts onboard the space station.

Related: Blobs in space and other cool science launching to the space station

The delivery includes new hardware, a carbon dioxide scrubber to ensure the crew has breathable air, and equipment for the station’s upgraded solar arrays. Among the experiments on board Cygnus are biological payloads, a brainless blob known as a slime mold, and two payloads to examine human muscle cells in space.

Cygnus NG-16 will depart with roughly 8,221 lbs. (3,729 kg) of disposal cargo, according to Northrop Grumman, along with experiments that will be performed as the spacecraft burns up naturally in Earth’s atmosphere.