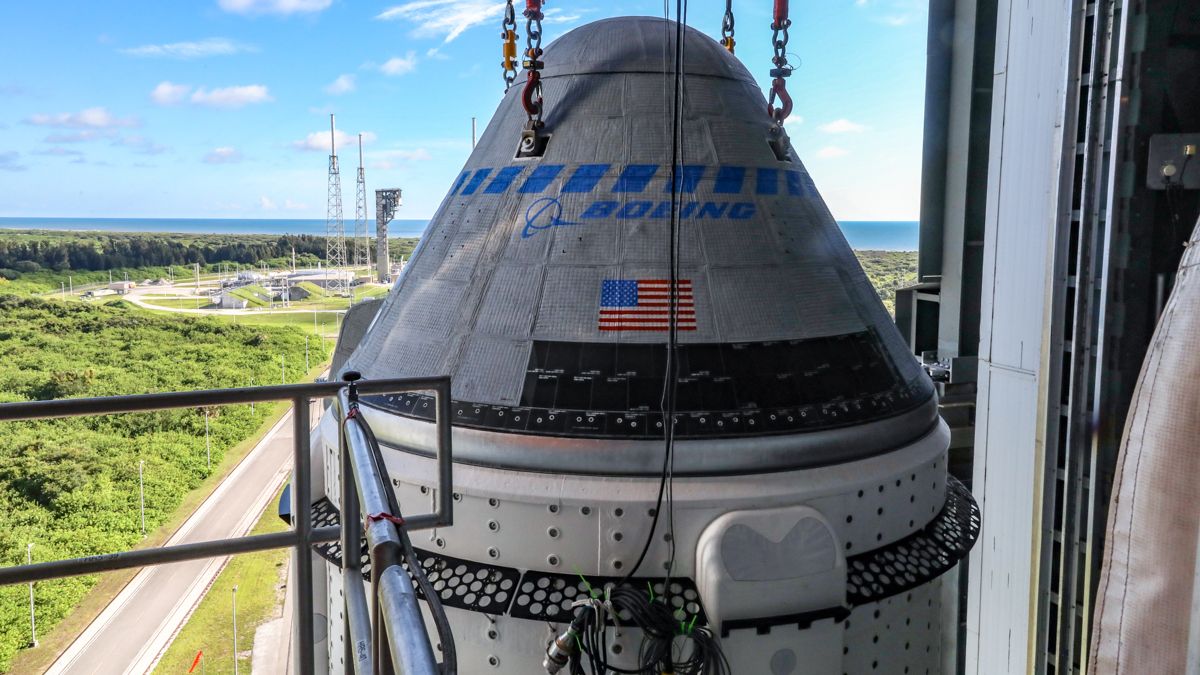 Boeing’s Starliner astronaut taxi is getting ready for a key test of its systems ahead of carrying humans.

The spacecraft was scheduled to launch on an uncrewed mission and attempt to reach the International Space Station on July 30 using a United Launch Alliance (ULA) Atlas V rocket, but it has been delayed indefinitely following a docking incident with a Russian module and newly discovered valve issues on the Starliner spacecraft.

On July 29, NASA and Boeing announced that they would stand down from the July 30 launch attempt, postponing to Aug. 3. The decision came as NASA and Roscosmos evaluated a situation on the International Space Station involving the newly arrived Nauka module unexpectedly firing its thrusters, briefly interfering with the station’s orientation.

Then on Aug. 3, NASA and Boeing decided to stand down from backup launch opportunities on both Aug. 3 and Aug. 4, as officials discovered a valve issue on the Starliner spacecraft. The next available launch window has not yet been announced.

The mission, called Orbital Flight Test 2 (OFT-2), will be a crucial milestone for Boeing, which was unable to reach that destination with Starliner’s first test flight in December 2019. After completing a thorough investigation in July 2020, Boeing and NASA implemented 80 “corrective actions” to prepare Starliner for a do-over of the OFT mission. If all goes well, NASA astronauts will soon begin flying astronauts to the space station for NASA.

Here’s a complete guide to everything you need to know about the OFT-2 mission — including how to see the launch and all related live events online and in-person — and what this historic mission will mean for NASA and the commercial spaceflight industry.

When is the launch?

Editor’s note: The following webcast schedule is *** NO LONGER UP TO DATE *** as Boeing and NASA have not yet decided on the next launch opportunity for OFT-2 following a series of delays in July and August. We will update this section with new webcast details once that information becomes available.

The Starliner mission, also known as Orbital Flight Test 2 (OFT-2), currently has no planned launch date. It was scheduled to lift off July 30 at 2:53 p.m. EDT (1853 GMT), then delayed to Aug. 3 at 1:20 p.m. EDT (1720 GMT) before Boeing and NASA decided to delay the mission indefinitely and return Starliner to the factory to fix some malfunctioning valves on the spacecraft.

The timing of the launch is always subject to change due to technical, weather or other factors. Launch weather forecasts will be provided by the U.S. Space Force’s 45th Weather Squadron.

You can watch live coverage of the mission here at Space.com, courtesy of NASA Television. NASA’s launch broadcast will begin with prelaunch activities and end after Starliner’s orbital insertion; live coverage will resume when Starliner approaches the space station for docking about 24 hours after liftoff.

Starliner should reach its preliminary orbit about 31 minutes after liftoff. After the orbit insertion maneuver, the spacecraft will begin a 24-hour orbital chase to catch up with the International Space Station for rendezvous and docking.

About 18 hours after Starliner docks, the Expedition 65 astronauts onboard the space station will open the hatch and enter the Starliner vehicle for an inspection. NASA has not yet announced a new schedule for hatch opening, but expect that moment, too, will stream live on NASA’s channels and on Space.com.

Starliner will spend less than a week docked at the space station before returning to Earth for a parachute-assisted landing at White Sands Space Harbor in New Mexico; NASA has not yet announced a new landing date for the mission.

Where will Starliner lift off?

A United Launch Alliance Atlas V rocket with Boeing’s Starliner spacecraft onboard stands on the launch pad at Space Launch Complex 41 ahead of the Orbital Flight Test 2 (OFT-2) mission after being rolled out from the Vertical Integration Facility on July 29, 2021, at Cape Canaveral Space Force Station in Florida.  (Image credit: Joel Kowsky/NASA)

Boeing will launch Starliner from Space Launch Complex 41 at Cape Canaveral Space Force Station in Florida, a busy launch port situated near NASA’s Kennedy Space Center. The launch area is about an hour east of Orlando adjacent to the Atlantic coast, providing for a safe region for rocket stage drops and overall launch activities.

This is the same facility from which the first U.S. satellite, Explorer 1, launched in 1958 and where some of the first American astronauts launched for space and Earth orbit. Numerous uncrewed planetary probes have also departed Cape Canaveral over the decades, with some reaching into interstellar space.

How to see the launch in person

The launch of Boeing’s Starliner Orbital Flight Test 2 (OFT-2) mission may be visible to spectators along the eastern seaboard of the United States. This visibility map shows where the rocket will be visible for about five minutes after liftoff. (Image credit: ULA)

Planning to watch the launch in person? Due to the ongoing COVID-19 pandemic, NASA is limiting facility access to the public and only some media will be there in person. Spectators wishing to view the launch from the nearby NASA Kennedy Space Center must purchase tickets online in advance. (But spectators beware: With the increasing number of COVID-19 cases in Florida, NASA may very well end up canceling the event at KSC.)

Viewers along the eastern seaboard of the United States may be able to catch a glimpse of the rocket soaring through the sky, weather and daylight permitting. However, if the launch occurs during the daytime, it may be difficult to observe.

Boeing technicians load a package of mementos aboard the Orbital Flight Test-2 Starliner capsule in preparation for its launch. (Image credit: Boeing)Image 3 of 5

A Boeing technician holds a package of CST-100 Starliner Orbital Flight Test-2 patches to be flown on board the mission. (Image credit: Boeing)Image 4 of 5

Rosie the Riveter commemorative coins are prepared for their flight on the second orbital flight test of Boeing’s Starliner. (Image credit: Boeing)

While Starliner will be uncrewed for the OFT-2 mission, the commander’s seat will have a passenger: Rosie the Rocketeer, Boeing’s anthropometric test device. Rosie also flew to space briefly during the first Starliner mission in December 2019 and was equipped with 15 sensors to evaluate the stresses of spaceflight on the human body. But for OFT-2, the “dummy” won’t be collecting any more data.

“Rosie’s there, but she is essentially a ballast,” John Vollmer, vice president and program manager of Boeing’s commercial crew program, said in Tuesday’s prelaunch briefing. “We are taking measurements — we’ve put sensors in the seats and other locations in the vehicle, as we found that we thought that would be more valuable since we’d gotten the data from Rosie on the first flight.”

Much of Starliner’s cargo will be simple supplies and equipment for the Expedition 65 crew aboard the International Space Station. Starliner will bring more than 400 pounds (180 kilograms) to the orbiting laboratory, and upon departure the spacecraft will return to Earth with more than 550 lbs. (250 kg) of cargo, according to NASA.

Starliner will also fly commemorative things. OFT-2 will include 14 banners from historically Black colleges and universities (HBCUs), Silver Snoopy pins (traditionally given to NASA astronauts who directly contribute to human spaceflight success) and Rosie the Riveter commemorative coins to honor the nearly 19 million American women who contributed to the aerospace industry during the Second World War.

Other items aboard the spacecraft include American flags and an ID card signed and used by Boeing’s founder, Bill Boeing, to travel the U.S. by air. The same card also flew onboard OFT-1.

What is Starliner’s mission?

The fully assembled Starliner spacecraft for OFT-2 is lifted inside the Starliner production factory at Kennedy Space Center in Florida, on Jan. 13, 2021. (Image credit: John Grant/Boeing)

The overall goal of Starliner’s OFT-2 mission is to rocket a spacecraft to the International Space Station, dock with it to exchange supplies and equipment, and execute a safe splashdown in the Atlantic Ocean. This is an uncrewed test mission to ensure that the key milestones of an astronaut flight are possible so that Starliner can be certified to carry astronaut crews.

In 2014, both Boeing and SpaceX received commercial crew development contracts from NASA, together valued at $6.8 billion, to bring astronauts to space as a replacement for the space shuttle vehicle that retired in 2011. In the interim, Russia’s Soyuz spacecraft brought all NASA astronauts to the ISS.

SpaceX’s Crew Dragon began operational flights with astronauts in 2020, reducing NASA’s need to use Soyuz spacecraft. However, Boeing encountered technical problems that have delayed Starliner human flights. During Starliner’s last test attempt in December 2019, the spacecraft experienced a series of glitches that stranded the vehicle in the wrong orbit to reach the International Space Station.

The spacecraft landed safely after its failed attempt to reach the ISS, and since then NASA and Boeing have been working together to fix dozens of issues identified during the 2019 flight.

Media reports suggest that if Boeing’s OFT-2 passes its flight certification, the company may fly astronauts on a crewed test flight in late 2021. (NASA and Boeing officials declined to give a more specific timeframe for the first crewed mission during an OFT-2 prelaunch news briefing on July 27; that was before the latest series of delays.)

Editor’s note: The times and dates listed on the following schedule are *** NO LONGER UP TO DATE *** as Boeing and NASA have not yet decided on the next launch opportunity for OFT-2 following a series of delays in July and August. However, the flight profile likely will not change for later launch opportunities. We will update this section with new webcast details once that information becomes available.

Should the schedule hold, Starliner will blast off aboard a United Launch Alliance Atlas V rocket at 1:20 p.m. EDT (1720 GMT) on Tuesday (Aug. 3) from Space Launch Complex-41 on Cape Canaveral Space Force Station in Florida.

The spacecraft will reach its preliminary orbit roughly 31 minutes later, and then get ready to dock with the International Space Station. Docking is scheduled to occur roughly 24 hours after liftoff.

NASA says the spacecraft will remain docked to the ISS for about five to 10 days before coming back to Earth. Starliner will attempt to land at White Sands Space Harbor in New Mexico on the same day that it undocks from the space station. Through the whole process, Boeing and NASA will be assessing and testing the spacecraft’s performance to try to certify the spacecraft to ferry astronauts.

Some of the things NASA wants to see are the successful in-orbit operation of all major spacecraft systems, good performance of guidance, navigation and control systems through launch, orbit and re-entry, and safe acoustic and vibration levels for astronauts. Starliner will also have to meet all its basic mission requirements of launching, docking and landing to a degree that is operational and safe for astronauts.

Before the most recent delays, NASA had pledged to put astronauts on board Starliner for a crewed test flight in 2021, as long as OFT-2 meets its objectives. “NASA and Boeing will look for opportunities toward the end of this year to fly Starliner’s first crewed mission to the space station,” the agency said in a recent statement. However, that timeline will likely be affected by Starliner’s ongoing delays.

That first astronaut mission, called Crew Flight Test, will go to space with veteran NASA astronauts Barry “Butch” Wilmore, Nicole Mann and Mike Fincke. The agency says that the crew will remain in space for “several months,” but didn’t specify if that would be a normal six-month rotation. Sometimes the schedule is adjusted for operational reasons, and as a comparison point, SpaceX’s first crewed test flight in 2020, Demo-2, was about two months long.

Crew Flight Test will need to pass its major milestones to allow Starliner to get full certification to haul astronaut crews to space regularly. Once that happens, NASA will have two commercial crew vehicles to use (Starliner and Crew Dragon) for all its astronaut flights.

Editor’s note: This article was originally published July 29, 2021 and was last updated on Aug. 13.