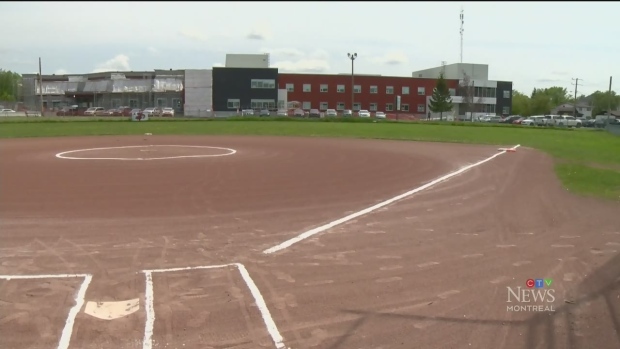 The community of Kahnawake, on Montreal’s South Shore, is nearing completion on a new baseball diamond for its midget and bantam teams.

The Kahnawake Warhawks have spent the past two seasons playing anywhere but in their home community because the existing fields were just too small.

Terry Stacey, president of minor league baseball in Kahnawake, said teams were inadvertently causing damage through no fault of their own.

“They would hit that over the fence and there’s a hospital across the street where the parking is, so we’d break a lot of car windows,” said Stacey.

To prevent accidental damage they ended up travelling over a bridge that has frequently been under construction.

“Our bantam team didn’t like it too much because of all the work on the Mercier bridge. So I mean they had to travel 22 games, fighting traffic all the time,” said Stacey.

Residents of Kahnawake decided several years ago to build a new field but as the project got underway they realized construction was going to break their $250,000 budget.

That’s when recreation manager Mackenzie Whyte started looking for other sources of funding and discovered the Toronto Blue Jays ‘Field of Dreams’ program.

“After a thorough search I found this fund,” said Whyte.

“I thought maybe this is something we could use, might be a longshot,” said Whyte.

It turned out to be a home run, as the Blue Jays decided to fund Kahnawake’s new field, as one of 15 communities given assistance this year.

The major league baseball team said it was impressed with Kahnawake’s commitment to local baseball.

“It was very exciting for us,” said Robert Witchell, executive director of the program.

“They were very explicit about building a new field, about the popularity of baseball, what that would do for their community, the hundreds and hundreds of kids that would be able to participate in baseball as a result of the new build.”

“We had an increase in registration for baseball and we had to accommodate the demand that’s in our community.”

About all that’s left is to rake out dirt for the pitcher’s mound.

The Kahnawake Warhawks are slated to play their first home game on Wednesday, June 26.

With a file from Julian McKenzie