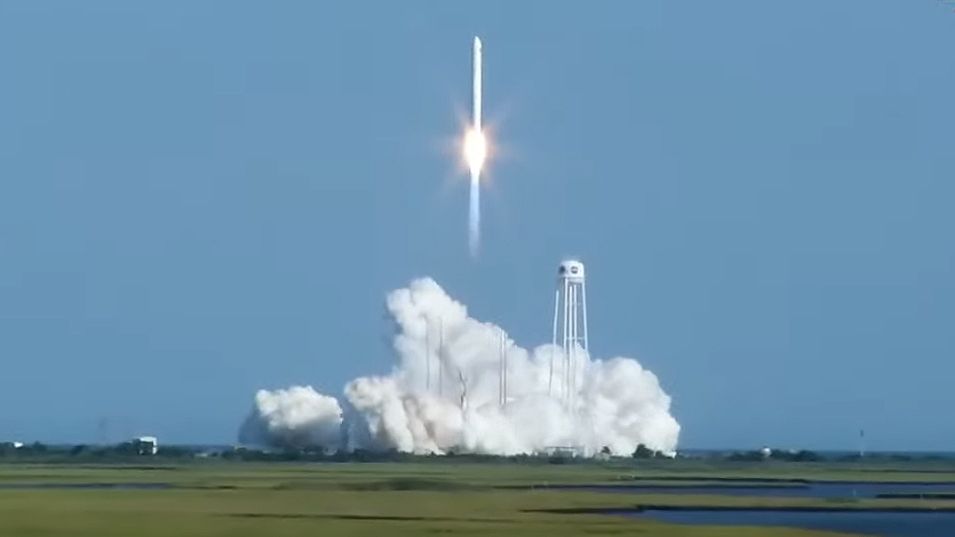 Perched atop a two-stage Antares rocket, the uncrewed Cygnus NG-16 spacecraft — the heaviest Cygnus spacecraft yet — blasted off from Pad 0A at the Mid-Atlantic Regional Spaceport at NASA’s Wallops Flight Facility on Wallops Island, Virginia at 6:01 p.m. EDT (2201 GMT) on Tuesday evening, the end of the planned five-minute window.

It was nothing but clear skies in Virginia this evening as the 139-foot-tall (43 meters) Antares rocket leaped off its launch pad. A possible wayward boat and a Helium valve issue almost thwarted today’s launch attempt, but the teams were able to work through the issues and it made for a beautiful launch.

“And we have liftoff of Antares for the NG-16 mission,” NASA’s launch director said from mission control at Wallops during a live broadcast of the launch. “The S.S. Ellison Onizuka is now on its way to the International Space Station to deliver more than 8,200 pounds of cargo,” added NASA public affairs officer Courtney Beasley, who provided live commentary from Mission Control in Houston.

The craft is hauling more than 4 tons (3,719 kilograms) of scientific equipment and supplies for the Expedition 65 astronauts onboard the space station. It’s also packed with new hardware and other equipment for the station’s upgraded solar arrays.

Dubbed NG-16, the mission is Northrop Grumman’s 15th operational resupply launch to the space station since 2014 and is now the fifth Antares to fly in the more capable 230+ configuration. This configuration allows for payloads to be loaded onto the spacecraft later than usual, which means more science.

“I’m really looking forward to our sweet 16 mission [on Tuesday],” Frank DeMauro, vice president and general manager for tactical space at Northrop Grumman, said during a prelaunch news conference on Monday (Aug. 9). “Northrop Grumman is happy to support NASA and our commercial partners as we continue the journey in human space exploration.”

The rocket’s first stage is powered by two Russian-made RD-181 engines which are fueled by rocket-grade kerosene, enabling them to produce 864,000 pounds of thrust at liftoff. The first stage separated from the rocket’s upper stage just over three minutes into flight.

Shortly after, the payload fairing jettisoned, leaving the Cygnus exposed to space. Powered by a solid-fueled upper stage, the Cygnus was deposited in its preliminary orbit and ready to begin its journey to the space station. The cargo craft will spend two days chasing down the orbital outpost before berthing to the station with the help of a robotic arm.

NASA astronaut Megan McArthur will capture the vessel on Thursday (Aug. 12) at about 6:10 a.m. EDT (1010 GMT), with ESA astronaut Thomas Pesquet serving as backup. The craft will remain at the station for approximately three months, after which it will detach itself and burn up upon reentry into the Earth’s atmosphere.

Northrop Grumman makes both the Antares rocket and the Cygnus spacecraft, and the company has a tradition of naming its spacecraft after fallen heroes who have made a significant contribution to human spaceflight.

For this flight, the company chose to name its Cygnus cargo ship after the late astronaut Ellison Onizuka. He was NASA’s first Asian-American astronaut, and made the ultimate sacrifice as he lost his life onboard the space shuttle Challenger in 1986.

Onizuka was selected by NASA as an astronaut in 1978, following a successful career in the military as a test pilot. He was an inspiration for the Asian-American community and for those who wanted to explore new horizons.

“It’s our tradition to name each Cygnus after an individual who’s played a pivotal role in human spaceflight,” DeMauro said. “Onizuka made the ultimate sacrifice and service to further human exploration, and was a shining example to those reaching for the stars.”

Tucked inside the Cygnus is a bevy of time-sensitive cargo items, including biological payloads and even a brainless blob known as a slime mold. Researchers will test how the unique organism, which can move, communicate and even feed itself without a brain.

NASA is also sending two different payloads that will look at human muscle cells in space. One of those, called Cardinal muscle, will aim to develop treatments for a muscle-wasting disease known as sarcopenia. This disease accounts for approximately 30% of the loss of skeletal muscle here on Earth.

By growing muscle fibers in space, the team from Palo Alto Veterans Institute for Research, which is led by Ngan Huang of Stanford University, will determine if these muscle fibers can be used to test effective treatments.

The other muscle-related experiment is through a partnership with the Japan Aerospace Exploration Agency (JAXA). This experiment, called the anti-atrophy research investigation, will look at muscle cells and treatments, specifically an atrophy inhibitor called C-14 sequin and a muscle growth accelerator called celestial.

These two treatments will be applied to muscle fibers grown on the space station to see how effective they are in microgravity.

“Blob” is an educational experiment ran by France’s space agency CNES. Students aged between 10 and 18 years are invited to investigate the Blob, a naturally-occurring slime mold, or Physarum polycephalum. (Image credit: A. Dussutour/CNRS)Image 2 of 3

“Blob” is an educational experiment ran by France’s space agency CNES. Students aged between 10 and 18 years are invited to investigate the Blob, a naturally-occurring slime mold, or Physarum polycephalum. (Image credit: A. Dussutour/CNRS)Image 3 of 3

The naturally-occurring slime mold Physarum polycephalum is a single-cell organism that can move, feed, organize itself, and transmit knowledge to other slime molds. (Image credit: A. Dussutour/CNRS)

Slime molds are single-celled organisms, much like amoebas, but are known for their rapid growth rate. Easily grown in a lab, slime molds can double in size every day and easily span several meters. Resembling a brightly colored patch of mildew, the researchers will study how the slime molds behave in space.

“We study slime molds for their plasticity, which is exceptional for a single-celled organism,” explains Audrey Dussutour, senior researcher at the Research Centre on Animal Cognition (CRCA) said in a statement. “They can learn and remember, pass on information to their fellow creatures and find their way through a maze, in the same manner as animals that appear to be more sophisticated.”

The experiment, run by ESA astronaut Thomas Pesquet, will also be used as a way to encourage children around Europe to be interested in biological sciences.

Preparing for the future

Also on board the Cygnus will be a new carbon dioxide scrubber. The hardware will help ensure the crew has breathable air while testing out new technologies for future space missions.

The current system works by removing water vapor and carbon dioxide from the atmosphere inside the space station. The water vapor is collected and cycled through the system before being returned back to the cabin. Simultaneously, the carbon dioxide is either diverted to a reduction system, where it will be converted into water, or it is expelled from the spacecraft.

It’s a system that’s been in place for nearly 20 years. So why is NASA sending a new one?

NASA is upgrading various systems on the orbital outpost to not only prolong the life of the space station but also to make sure it has what it takes to keep astronauts healthy on long-duration missions. The agency wants to go back to the moon and on to Mars one day and this is the system that’s going to make sure crews on spacecraft and space stations of the future stay healthy.

The hardware designers at NASA’s Johnson Space Center in Houston and NASA’s Marshall Space Flight Center in Huntsville, Alabama have worked to make sure that this new system will be more durable and have less failures. It will be tested for one year while samples collected for its carbon dioxide beds will be sent back to Earth for analysis.

If all goes as planned, the hardware will undergo more extensive testing before being integrated into future spacecraft.

NASA is heading back to the moon sometime later this decade. Astronauts visiting the lunar surface will eventually need to build things like habitats and other infrastructure. But it’s not really feasible for crewed missions to haul construction equipment to the moon.

Instead, the agency put a call out to see how we might take materials already on the lunar surface and turn those into durable habitats.

Made in Space has the answer: 3D print what you need. The company, now called Redwire, sent the first 3D printer into orbit five years ago.

Michael Snyder, chief technology officer at Redwire, told Space.com that the printer is getting some upgrades. The company loaded hardware and 3D-printing ingredients into the Cygnus, including a simulated lunar regolith called JSC-1A. Once installed at the orbiting laboratory it will print three different slabs of regolith that will eventually be returned to Earth for analysis.

The new printer head, which is roughly the size of a loaf of bread, will be installed on the current printer. Regolith feedstock and a binding agent will then be used to heat, bind and squeeze the simulant into slabs. This process has been tested extensively here on the ground, but never in space. Synder and his team of Redwire engineers want to make sure the process runs the same way in microgravity.

If everything goes as planned, this type of technology could be scaled up in the future to make durable habitats, landing pads and even roads on other worlds.

According to Snyder, the print job will take minimal crew time. They will install the new components into the printer and then walk away while crews on the ground will operate the printer. The whole process for each print job takes approximately two to three hours.

“They basically set it and forget it, so to speak,” Snyder told Space.com. “On station, the crew’s time is really valuable so we really want them to be hands-off as much as possible.”

Microgravity poses its own unique challenges: Stuff floats because hot air doesn’t rise as it does on Earth. This is why the ISS is the best lab around. Once all three samples are printed, they will be packed up to return to Earth on a later mission.

Snyder says the team back on Earth will perform destructive tests on the slabs and if analysis shows that the print job is comparable to its terrestrial counterparts, the process will likely work on the moon or Mars. (For comparison, the gravity is six times weaker on the moon than it is on Earth, and Mars’ gravity is about three times weaker than Earth’s.)

Components of a reentry capsule for the KREPE experiment. (Image credit: Alexandre Martin Lab/University of Kentucky)

Researchers from the University of Kentucky are also testing out new thermal protection materials, or TPS. As part of an investigation called the Kentucky Re-Entry Probe Experiment (KREPE), three different capsules each carrying different materials will blast off to the ISS, then go out in a blaze of glory when Cygnus departs the stations for a fiery return to Earth.

The materials are designed to withstand the searing heat of reentry while the Cygnus capsule is not. As the craft plummets through the atmosphere, the special capsules will release from the spacecraft and splash down in the Atlantic Ocean.

Researchers say they will not recover the capsules but will recover loads of data collected by a suite of onboard sensors in each one. They’ll analyze the data collected and determine how efficient each material was.

Cygnus will remain attached to the space station until sometime in November.