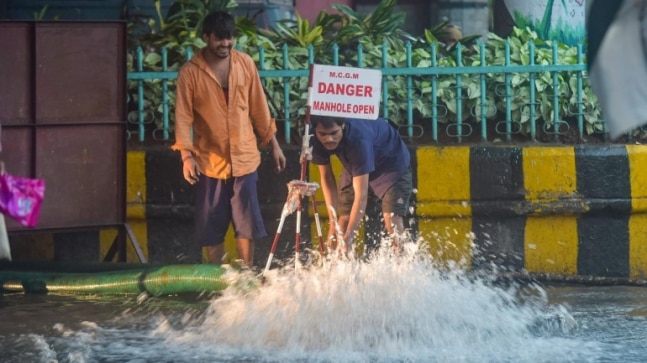 A Bombay woman fell into an open basement in Ghatkopar and her body was found two days later in the Haji Ali Sea, 22 km away.

A woman fell into an open drain in Mumbai and her body was found 22 km away. (Representative image of PTI)

A 32-year-old woman disappeared in Ghatkopar on a rainy day after sending her son home, but did not return herself. After searching for her for an entire day, authorities found her body in the sea at Haji Ali and officials suspect she fell into a drain and her body traveled 22km through the sewer lines.

According to a report published in Mumbai Mirror, Sheetal Dama had sent her son home on October 3 for fear of heavy rain. However, he did not return even after several hours.

When his family began a frantic search, his bag was found near an open sewer in Ghatkopar.

Police suspected he may have fallen into the drain and started a search in the nearby areas of Mahim, Tandeo, Bandra-Kurla. It was only after 33 hours that authorities found his body at sea in Haji Ali.

However, authorities are not convinced that Sheetal Dama died due to drowning, as has been said after her autopsy.

BMC officials suspect that something is wrong, as the sewer lines in the area are not designed so that a human body can travel 22 km from Ghatkopar and land Haji Ali without getting caught.

Mumbai Mirror has quoted a BMC official as saying that the area sewer line has three cooking points where the body should have been trapped and that there is no way the body would float towards Haji Ali from Ghatkopar.

However, with no evidence of Sheetal’s disappearance, police officers continue to ask locals to see what led to her death.

Click here for full IndiaToday.in coverage on the coronavirus pandemic.