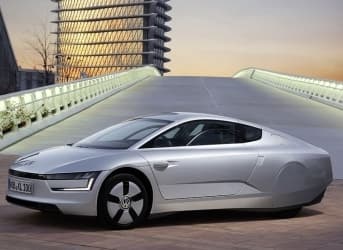 The star of this week’s Qatar auto show will no doubt be Volkswagen’s “one-liter car,” the XL1 diesel hybrid, which is capable of achieving more than 300 mpg.

The $ 60,000 XL1 runs on an 800cc two-cylinder turbo-diesel power plant (half a BlueMotion engine) that produces 47 hp, backed by a 27-hp electric motor hat powered by batteries of lithium ion. The batteries can be charged from a domestic outlet, allowing the car to travel 22 kilometers with only electricity.

Over the past decade, governments around the world have been pushing the auto industry to get better gas mileage, better fuel economy in vehicles and other energy sources. The XL1 meets all of these requirements.

The XL1 also emits only 24 g / km of CO2 and has a time of 0 to 60 of 11.9 seconds. Its 10-liter diesel tank gives the XL1 a range of about 340 kilometers. Added to the remarkable fuel efficiency of the XL1 is the fact that the car has been designed to be as light as possible, with an unpainted carbon fiber skin on a magnesium alloy substructure.

The XL1 is an idea of ​​the former head of the Volkswagen group, Ferdinand Piëch, who started the project in 1998. Volkswagen designers and engineers responded to Piëch’s challenge and immediately set about producing a car. with carbon fiber body with tandem seats and a one-piston engine. In 2002, in his last public appearance as chairman, Piëch addressed a VW shareholder meeting in Hamburg with the prototype and even managed to exceed the fuel consumption target he had set for his engineers. . After Piëch left Volkswagen, the project was virtually suspended until Piëch’s replacement, Martin Winterkorn, along with Volkswagen’s head of research and development, Ulrich Hackenberg, revised the concept and developed the L1 two-cylinder hybrid, which appeared at the Frankfurt Motor Show in 2009.

Volkswagen engineer Andreas Keller, who has been with the project since its inception, said: “In many ways, this car is similar to the Bugatti Veyron. I mean it’s the absolute pinnacle of engineering that we as a company are now able to do. It’s an extreme car, it’s the opposite of the Veyron. But technology and design are equally important. There had to be some creature comforts, but we did our best to keep the weight low. Air conditioning, for example, runs on a smaller unit than usual, so some heat may pass during the UAE summer. In addition, the gearbox, which is a dual-clutch automatic, has been relocated to a magnesium housing because it’s incredibly light – the whole car only weighs 1,752 pounds. The tires are narrow to keep the rolling resistance reduced and the rear ones are covered by wheel pallets that facilitate streamlining. You will also notice that there are no exterior mirrors. There are two rear-facing cameras installed on each side of the car and real-time images are sent to the door screens. The XL1 is being built at Volkswagen’s Osnabrück facility.

The bad news for XL1 enthusiasts is that currently only 250 will be built, and production will cease next year. Interestingly, in October 2013, the XL1 debuted in the United States in Chattanooga at the 23rd Annual Conference of the Society of Environmental Journalists. Oliver Schmidt, CEO of Volkswagen Group, Inc.’s Office of Engineering and Environment, said at the presentation of the prototype: “The XL1 offers an insight into Volkswagen’s current and future green mobility capabilities and puts The final achievements of “Thinking Blue.” Volkswagen is proud to present this ultra-consumable vehicle to the Society of Environmental Journalists, a group that shares our commitment to environmental stewardship. ”

As Volkswagen of America, Inc., in 2011, it opened a $ 1 billion Volkswagen Chattanooga factory that manufactures the Passat sedan for the U.S. market, which provides more than 12,000 full-time jobs and is responsible for annual revenue of $ 643 million in the area, as well as $ 53.5 million annually in state and local taxes, the question might be: why don’t we make XL1 in the US?

By John Daly of Oilprice.com